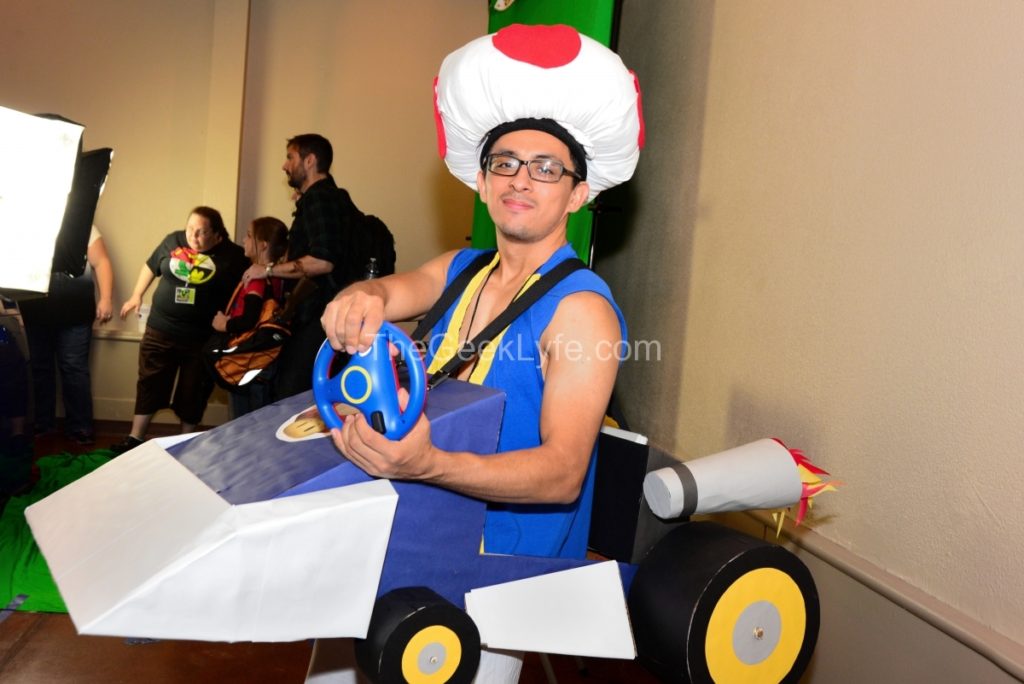 This year we here at Geek Lyfe have taken on the challenge of trying to attend every geeky convention in Arizona and cover it for our blog to help give everyone their just exposure! Everyone here knows of Phoenix Comic Con and how massive it is but not many really know everything Arizona has to offer. Game On Expo was a gaming convention specifically for video games, which appealed to me since I am a huge gamer. Because this was the first Game On Expo, I expected there to be next gen consoles and various games being sold by both triple A titles and indie alike, with a few panels sprinkled in. however I was pleasantly incorrect.

When we arrived at the expo we were greeted by staff and were politely shown the area to pick up our badges, I can not express just how kind and thoughtful the staff were. Everytime I had a question, they would go above and beyond to assist while adding a bit of playful banter in the mix. This was a great change from Phoenix Comic Con as the rush of people tends to make the con staff jaded and treat you more as convention goer #24857 rather than a human being. I’m not sure how they got their staff to assist with Game On Expo but kudos to them because they made the experience so much better.

After grabbing my badge I walked into the exhibitor’s hall where a good chunk of vendors were set up and had their wares on display. Again, I expected there to be shiny, new next gen consoles and their games to be tagged along but instead they hit me right in the nostalgia by having various gaming stores offer their older games for sale. I can not tell you how excited I was to go on treasure hunts for my favorite classic games like Golden Sun, Pokemon Snap, Link to the Past, and so many others. I think my favorite part of Game On Expo was crowded by other geeks who were also hoping to find their favorite games and hear them tell tales of how much of their youth was spent grinding for experience or exploring every inch of an area since strategy guides were not readily available as they are today and the sheer joy of victory when they accomplished their goal.

Another aspect of Game On Expo that I loved was the intimacy of the affair, because the Expo was so small, you were able to have full on conversations with game designers, artists, game store owners, cosplayers, and everyone else. I consider myself to be quite shy so having one on one interactions with all these folks made everything so much more enjoyable since they got to know me, my name, and we chatted over various things. At bigger conventions the hustle and bustle of thousands of people causes vendors to make everything fast and often cold, not because they themselves are rude but because they need to service so many people in such a short amount of time.

The cosplay aspect was both a great experience and uncomfortable. Starting with the good stuff, all of the cosplay vendors were set in their own, long hallway that had tables pressed against the walls. this offered fans, like myself, a chance to chat it up with cosplayers in a close environment I got to talk with Angelica Dawn and Roby Dee, two cosplayers who I follow closely and support. I would never have had this chance at bigger conventions due to the amount of traffic they get, so I applaud them for this. However the hallway, though long, was still very cramped having tables, cosplayers and then throwing in fans. I was one of the many people who wanted to stop and chat with them and in doing so, also blocked the hallway. We squeezed in as close as we could but it still got a bit uncomfortable and literally hot with the uncovered windows, the Arizona heat, and the various geeky bodies. Judging by the areas they had available to them, I can understand why they chose to have it in the hallway but still, I personally would have spread out the vendors a bit to lessen the congestion.

The gaming area was filled of arcade games, tvs, consoles, and so much more. The area was crowded as expected, yet players were kind and allowed others to have a turn when asked. I have been playing Street Fighter 4 for sometime with friends and can fully admit that I am without a doubt one of the worst players among them, but I still have mad love for the game and found other players who also loved SF4, we chatted a bit, played a couple matches and I actually won! I know that the gaming scene and conventions go hand in hand but what I loved about Game On Expo is that it was smack dab right next to the exhibitor’s hall. I almost never check out the gaming areas but because it was so close, I couldn’t resist and got to have this awesome experience. They also had a section for both table top gaming and a Magic the Gathering room for players to have fun and game.

Ultimately, I had a great time at Game On Expo  and loved every bit of it. Yes, they had some minor issues but those can get ironed out over time. As for being their very first convnetion, I thought it was amazing! Great job to their staff and I can not wait to see them again next year. On a minor note, I would like to add that the food was reasonably priced, a good quantity, and despite there being only one food vendor, the lines went fast. Seating was a bit of an issue but fellow con goers simply ate, got up, and offered their seats to others. Kudos to Game On Expo for that! Unfortunately, I was unable to attend any panels so I will not factor them into my review.

All photos taken by Photo Arcade