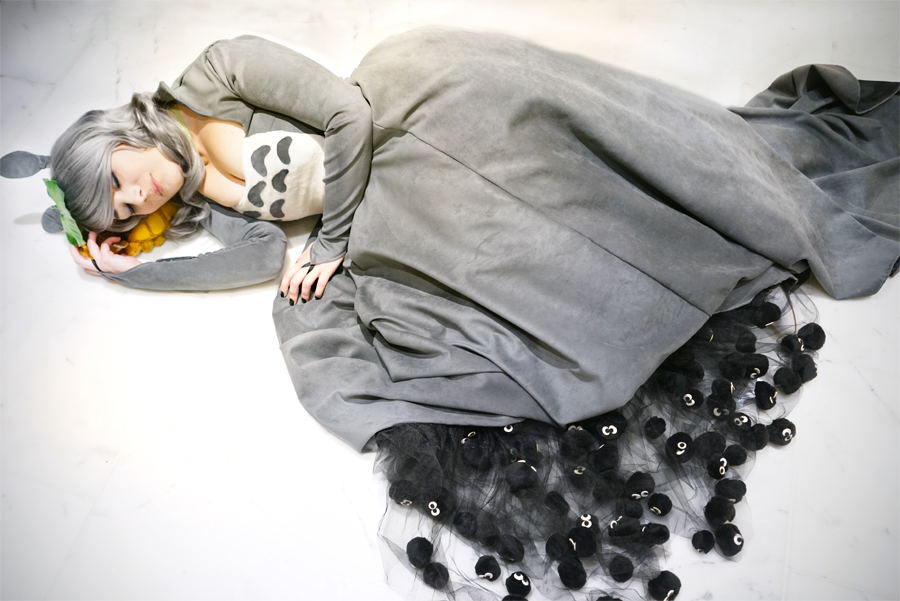 Cosplayer of the Week: Dustbunny Cosplay

This is a special interview for us since one of our favorite content creators around is none other than Dustbunny Cosplay! She is such a positive force in the community who is so down to Earth, and kind. We’ve met her a few times at conventions and the experience is always fun!

We hope you enjoy our interview!

What is your cosplay origin story?

I first started cosplaying at Katsucon in 2003. I was a freshman in high school at the time and heard from a friend that there was a convention for anime happening in a few months. She also told me that people will go to the event dressed up as their favorite character. This got me super excited because I was already a big fan of Halloween so dressing up outside of a holiday sounded super cool.

I ended up making a Kagome from Inuyasha cosplay. I did sew the skirt but the rest was all pinned and hot glued together. I also had the wrong shoes and used my real hair cause back then wigs were very hard to come by.

I went to the con with a few friends from school and my Dad. I was only there for a day but it was a great time. I meet a lot of other anime fans and cosplayers.

On the drive back home I knew I was hooked for life.

Out of all the years you have done cosplay, what has been one of your more favorite/proudest memories?

I have had many amazing memories from cosplaying but there is one that will always stand out to me.

Back when I was in college I was determined to win a cosplay contest award. I had been cosplaying for a long time at that point and wanted to feel validated in some way in the community. I also wanted to see if my skills were improving.

I said, “If I don’t win anything, I will just stop cosplaying.”

Cosplay is an expansive hobby and being in college you do start to question what path you want to head in career-wise. So for me, this made sense.

So in 2010, I entered the costume hall contest at Anime USA. I was super nervous entering and showing my work to the judges. They were very nice and it was an overall great experience. The contest judging was early in the morning on a Friday and the awards would not be given out till that Saturday night after the masquerade show. Needless to say, I was a nervous wreck for the whole con.

During the masquerade, I sat with one of my good friends as we watched the performers. I had entered contests in the past and lost so I was gearing up for another disappointment. When I started hearing the judges list off the winners I was holding my friend’s hand super tight. Then I heard my name called. I sat there in shock as my friend pushed me out of my seat. I won the Best of Friday. I walked up to the judges on stage and thanked them as the crowd cheered. It was the top off to a great weekend.

After that, I kept my promise to myself to keep cosplaying.

Many people online will simply see one of your images, appreciate it for the moment, and move on. However, I know that a lot of care and time goes into photoshoots. Could you describe your process for a cosplay photoshoot from the concept to when it hits your fans?

I have to say I don’t put time into doing outside photoshoots anymore. Having a full-time job really sucks away your free time. A lot of my photos come from cons. The hall photos have improved so much that it’s really ok to use those for your social media. But If I was to start cosplaying full-time I would totally be doing more outside shoots.

PS to my photographers, thank you so much for making me look good!

Out of all the cosplays you have ever done which one was your personal favorite even if it was not super well received by fans?

I feel I’m really lucky because my favorite cosplay was well received by the community.

My Totoro gown was made out of pure love for Totoro and my need to break away from the criticism I was receiving. During that time in my cosplay life, I was trying to cosplay characters that I didn’t really look like so I was getting a lot of hate. Mostly over my body. Also cosplaying in more revealing outfits was on the rise and I didn’t feel comfortable doing that. I tried a few times but realized it was not me.

On the east coast, I had seen people create gowns based off of characters for the Masquerade Ball events. I figured why not make a Totoro gown and add some soot sprites in it. The costume took me about a month to finish. Most of that time was sewing the soot sprites into the gown. I wore it for Katsucon 2014. Con-goers definitely loved the dress but I didn’t realize how much till I was on the plane back to LA and I saw my photos posted all over Tumblr and Reddit.

I was super grateful for the love I was getting for the costume. It proved to me that I could cosplay in a way that made me feel comfortable and show that creativity was valued in the community.

I love anime and video games. Harry Potter too.

I don’t have a preference. Normally I enjoy whatever version I am given first. But I will sometimes go back and forth.

It is apparent that you hustle to provide content for fans but when you actually have a day off, how do you spend it?

I love going to Disneyland with friends. Sadly, that is closed now so currently I have been reading, working out more, and listening to music.

You just radiate such confidence and the swagger of a champion. However, a lot of geeks often struggle with overwhelming self-doubt, anxiety, and depression. When you have those bad days and get down on yourself, what do you do to remind yourself that you are wonderful?

When I have a bad day I work on a costume. For me, cosplay has really helped me in that way.

Also having a few great friends helps too. It’s good to have people you trust that you can talk about your feelings with.

What is one piece of advice you wish you received when you first got into modeling/cosplay?

No joke, I improved so much after that.

-Leafeon – York in a Box

-Flareon – York in a Box