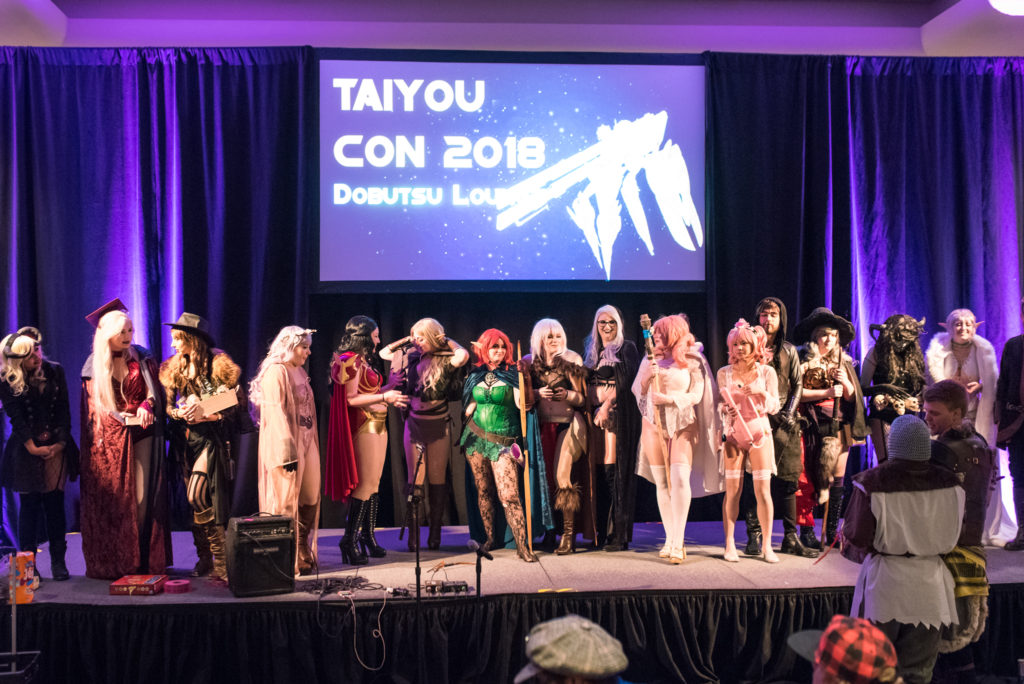 We have featured the Dobutsu Lounge in the past and absolutely support everything that they do and everyone who participates in it’s production. I had missed actually attending multiple times because of random mishaps, but finally, on Saturday night of Taiyou con 2018 I was able to participate! If you are unfamiliar with Dobutsu Lounge, it is a hostess cafe where the patron comes into the lounge and sits down at a table. The table is filled with other patrons and hosts that are both from male and female, and these hosts will entertain you with games before swapping to another table. During the night you will not only get to interact with a majority of the hosts and play various games but they also take breaks to show off their skill sets in the form of song, dance, and more. The event is geared to be of the more adult nature, often featuring seductive outfits. At the end of the night an auction is set up where you can pay money to spend extra time with a particular host of your choice if you are the highest bidder.

Seem odd to you? It is okay! These type of events aren’t too common in the west quite yet but in eastern cultures they are very popular. Brands like the Dobutsu Lounge are doing a fantastic job of introducing convention communities to the concept. I had always wondered just how the experience would actually be in person since I had always known of the lounge and what they did but never went through it.

Sure enough, I walked through the huge double doors of the Mesa Convention Center ballroom and was greeted by smiling faces introducing me to the event. The room was packed with people playing games and chatting with their peers with drinks in hand. The staff of Dobutsu were dressed in high fantasy attire to match their theme of “Dungeons and Dobutsu”. Notable members of the cosplay community were in their hand made outfits such as Q-Ki, Citrusbell, Peachgirl Cosplay, and more. I was seated at a table and played various card games and enjoyed the company of both friends and people I had never met. The hosts came by and gave short and sweet explanations to every game we played so that every person would know the rules while also giving each person undivided attention so they felt as though they mattered. Eventually the switch occurred and they wished everyone a fond farewell before a new group of hosts came by.

During the swaps a few of the staff would jump on the main stage to play guitar, dance, bring members of the crowd on stage to have them do silly acts, and more. You never quite knew just what was going to happen next and that made the event a blast. At one point a member of the Dobutsu Lounge dressed as Dark Souls character, Solaire, raised his arms high and in response the entire lounge did the same. The entire atmosphere was fun, uplifting, and a chill time.

I was so wrapped up in the festivities that I did not even realize I had been sitting right next to an Instagram friend by the name of Amblushcosplay. In my defense, she didn’t recognize me either until I posted a video of the event and she saw herself right next to me! Such a small world!

The Dobutsu Lounge was so good of a time that major convention guests Mega64 were in attendance along with the girls of the dope clothing brand Anime Trash Swag! They were knocking out games left and right having a wonderful experience.

The folks who run Dobutsu Lounge have a great thing going and I am so excited to see all of their future events. I highly recommend the Dobutsu Lounge to any one looking for a great time! While being entertained by ridiculously good looking men and women is all well and fine, I believe their biggest strengths are the games and talent show events. It is an experience unlike any other! I do recommend arriving early to ensure you and your friends have a spot since their popularity grows exponentially with each and every event! For more information about the Dobutsu Lounge check them out on Facebook!

Photos taken by one of our favorite photographers, Chocozumo!

previous post
Accomplished Cosplayer and Incredible Human Being, Mike Biasi, Has Passed Away
next post
Cosplayer of the Week: Joker’s Kiss Cosplay