Good day everyone! This Cosplayer of the Week is Shell Bell Cosplay who is from the Washington area! While she does dabble in a number of different genres of cosplay such as armor craft and regular cloth, I was surprised to see she comes from a traditional modeling background. What caught my eye about her was actually her Demon Hunter cosplay from Diablo 3! I thought it was so incredible that I just had to reach out for an interview!

I hope you all enjoy our interview with Shell Bell Cosplay! 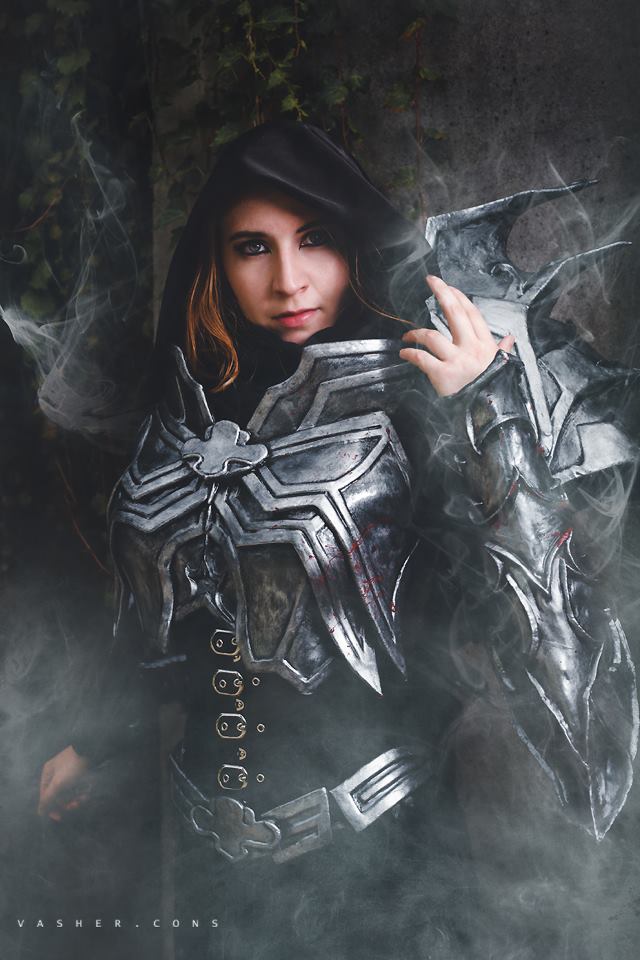 SBC: I’ve been cosplaying for about three and a half years. I actually started with making rave costumes, jumped pretty quickly to easy cosplays, got somewhat distracted by the world of costume photoshoots, and have now settled into cosplay as my crafting hobby of choice! I started off pretty slowly – just one or two cosplays a year, among all that other costuming – and have been slowly ramping up.

SBC: Probably this most recent GeekGirlCon. I wore my armor that day, and was in the line to get in when I noticed how many kids were there. (It’s a kid friendly con, but I had forgotten from last year.) Safe to say, the kids had already noticed me, in my shiny armor! (Never have I been more glad that it isn’t a sexy variant!) I had so many watching me from behind parents with awe in their eyes, sometimes I got shy waves, and a few brave ones came up to talk to me or ask for a picture! It was fantastic.

SBC:I am happy to say that I have not had a stand-out worst day yet! In that I have been truly lucky. I have had bad days for sure. Whether it’s costumes breaking at cons, running into your deadline, being unable to make a certain piece work, or just wanting to cry after being in armor for five hours. However, cosplay is a thing I do for fun, because I love it. If something is stressing me out, I ask myself why that is, and what I can change to feel better about it. Sometimes this means changing out of my outfit early, or not being able to wear the costume when I wanted, or having to restart a piece so it works. Being flexible with the non-catastrophic issues is worth it for my peace of mind!

SBC:Oh gosh, I have way too many hobbies! This is my big one right now. I also read books and comics, as well as play DnD and assorted video games – gotta have source material and inspiration for my cosplay, after all! I don’t game as much as I would like, but that’s life. I also dance, rave, bake, and tend to my excessive number of potted plants 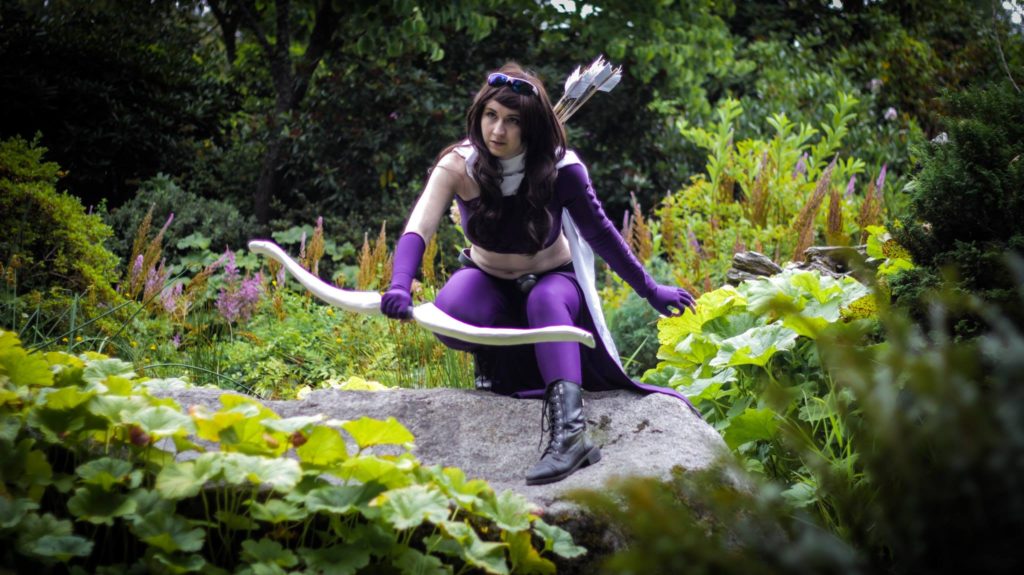 SBC: Novels, hands down. I was (and am!) an avid reader, and love immersing myself in fantasy universes. After I devoured the Tamara Pierce books, I jumped to Anne McCaffrey and was lost. I didn’t game much when I was young, but I played Tales of Symphonia with my three siblings, and I will treasure those memories always. I have a weakness for RPGs (especially JRPGs!) to this day because of that game!

TGL: Aliens have come to invade earth. You are the world’s final chance to defend against their assault. Which previous costume do you use and take the powers from, to fight against them? Why?

SBC: Demon Hunter, of course! Machine gun style crossbow bolts for the win. I am assuming here that ‘taking the powers of’ means I could actually lift my arms over my head and run around, which I cannot currently do in that armor. Hawkeye would also be totally doable – aliens are nothing that the Avengers haven’t seen before!

TGL:Do you have any projects in the near future we should be excited to see? 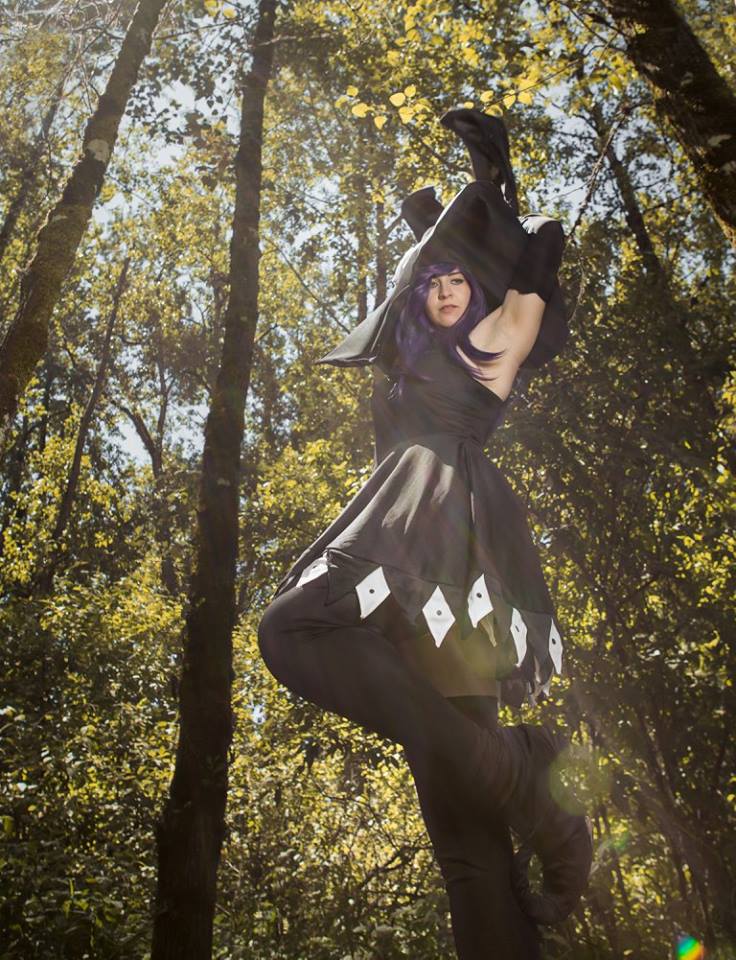 SBC: Absolutely! I am currently working on two Pokemon Gijinkas (human forms of Pokemon). I was only going to do one at a time, but I apparently have no self control. One is a ball gown, which is my biggest sewing project to date! My sewing machine and I have developed an uneasy truce, so hopefully it turns out okay.

SBC: Do it! It’s a blast. I highly recommend doing casual cosplays (or ones you can make with found items) for your first one or two or five. You can make great stuff with some clever thrift shopping! Also, don’t be afraid to buy pieces or costumes! I bought the signature piece on one of my favorite early cosplays, which I still wear all the time (Haruhara’s jacket). Just be honest about what you did and did not make! Lastly, ditch the deadlines! (Unless you like running around last minute with your costume – I know some people do!) Cosplay is a hobby, not a job, and there will ALWAYS be another event to wear your sweet new costume too. And, you will probably enjoy the event more if you weren’t up all night doing that one last thing. : )

SBC: My Demon Hunter armor, for sure. There was just so much to learn in order to pull it off, since I had never done worbla or any sort of armor before! It opened up a lot of new issues I had never had to consider, like how to shape curves out of foam or strap heavy pieces to my body. Honestly, any time you are learning to do a new technique, it makes a costume harder. Just learning to use my sewing machine for my early costumes was a nightmare! They’ve turned out great (more or less!) and I am so glad I persisted. I have found cosplay to be such a rewarding hobby. : )

I want to give a huge shout out to Shell Bell Cosplay for taking the time to answer a few of our questions! We seriously appreciate her and all the hard work she puts into her craft! Be sure to follow her on Facebook to get even more dope updates on her and her costumes!