Hey everyone! I am SO sorry for not getting to you sooner! While traveling, I have been attending a con each weekend for 4 weekends straight and it has been a lot to report and keep track of!

For years, Dragon Con has created its own reputation to be the con to attend if you are looking for the widest variety in cosplays, celebrity talents, and if you are looking for a big party! For my birthday weekend, I once again was able to attend Dragon Con in Atlanta, Georgia! Consistently taking place during the long Labor Day weekend each year, Dragon Con takes over Downtown Atlanta and their most prominent hotels: the Westin, Sheraton, Marriott, Hilton, and the Hyatt.

This year, I wasn’t able to book in a hotel room of one of the host hotels, so my friends and I booked an Airbnb a little ways away, where all of us were able to stay in comfort together. Last year, I was able to explore so much of the convention due to staying at the Marriott, but this year, to avoid too much traffic, our drivers would drop us off in downtown a little ways away from any of the specific convention venues, giving us more of an opportunity to explore downtown and what the convention had spread out for us. We took advantage of this, and unlike last year, I definitely got to know more of the hotels and what each offered.

Everything was set up in a very similar way as it was in 2018. Badges were picked up in the Sheraton, along with Disability Services, and Media and blood donation was on the very bottom floor of the Hilton. The Marriott Marquis was still the heart of the party with two bars in the lobby, a gather floor, and multiple levels of ballrooms with dance floors. Closely similar and just as lively was definitely the Hilton which had a dance party in the lobby, a bar off the main room, three levels of ballrooms with themed parties in each(such as Zombie parties, traditional EDM, Hobbiton, and Star Wars), and an entire patio of music, dancing, photo shoots, and of course, another bar down the mail hallway.

The Westin was a neat building to explore too! The main level was just the elevators and another long hallway to other ballrooms which held three more levels of ballrooms in the hotel where several dance parties and themed parties took place, like the Game of Thrones party called the Last Watch and the Heroes and Villains Ball. The Sheraton and the Hyatt were relatively calm in comparison to the other hotels, which offers a nice, quiet getaway if you’re a light sleeper, but is still bustling with crowds moving through to get to other hotels or the food court via the skybridges. I’d have to say the one thing that was different and improved this year was definitely access to the food court! New hours were extended til 2 a.m. and thought many of the specialty locations closed around 10, big brand foods such as Chick-Fil-A and Firehouse Subs stayed open late in order to keep convenience for hungry attendees to wee hours of the morning! The completion of construction gave access to those walking around outside as well as coming in through hotels and it finally felt like an all-around center location!

I am glad Dragon Con did not change their set up. Though the line to pick up badges was around 40 minutes long in the direct sunlight and humidity, it was easy to know where we were supposed to go. The same goes for Media badge pick-up. It being in the same location year after year makes it easier to find, otherwise, I would have been lost wondering around in each hotel. Disability services information was easy to come by as well, so it wasn’t too complicated to get the accommodations needed for those requesting or requiring extra assistance. Badges were checked less and more toward building entrances versus all escalators, skybridges and doorways, which helped with crowd control and kept everyone moving.

Weapons check was flexible and speedy through the day. The night brought more security in that aspect and everything had to be double and even triple checked! My friends Cat Woman belt, which was a belt that looked like a whip on purpose, even had to be checked by three different security officers because it simply looked like a whip. I thought that was a bit much, but I would rather her go through that, and everyone’s weapons be thoroughly inspected, than most or all weapons be banned. I am glad people were able to show off intricate props and pieces they’ve worked on for their cosplays!

Speaking of cosplays, there was no shortage in amazing costumes this year! With bathing suit coverage required, everyone was able to let their creativity blossom! I ran into amazing cosplayers such as Sylvia Cosplays, Justin.Cosplay, HendoArt, Mirror Bright Cosplay, SouthernRoseCosplay, Khal_of_Atlantis, SantorasPropShop  and so many others as I wandered the halls and streets! Cosplays ranged from Disney princesses to Anime characters, and with Celebrity guests like Aly and AJ Michalka, Lana Parilla, Eddie McClintock, Anson Mount, Yaya Han, Shannon Purser, Mark Sheppard, Rebecca Mader, Josh Keaton, David Anders, Emily Coutts, Cary Elwes, Dan Folger, and so much more, there was a little something special for everyone to fan over! I myself had the pleasure of chatting with Aly and Aj and waving at Zachary Levi while checking out the Walk of Fame.

The concert didn’t last long, though, as in the beginning of their second song, one from their new album I had never heard before, a speaker over the right side of the audience exploded and caught fire.

I was not able to attend any panels this year, as I wanted to explore more, but I was able to attend Aly and Aj’s totally full free concert hosted in the Sheraton. The crowd was hyped and immediately on their feet as they began with their first song Like, Whoa! The concert didn’t last long, though, as in the beginning of their second song, one from their new album I had never heard before, a speaker over the right side of the audience exploded and caught fire. Aly and Aj were quickly escorted from their first ever performance at a comic con and all attendees were safely evacuated from the building. Other than some of the employees being rude and yelling at the lingering fans, hopeful that they would get to still see the show after a quick clean-up, the whole process was handled quickly and incredibly professionally, which was nice as I never once felt uneasy about my safety. I was sad we were unable to see the show and felt bad for Aly and Aj, as they were so looking forward to the concert and the fans, but it was a little funny walking to other hotels and watching fire trucks and police escorts flying down the road while other attendees outside walking around were totally clueless as to what was going on. My friend, and helper for Dragon Con 2019, _KaiCosplay, will always be able to say we were there.

This year offered many new experiences. One that I would check out more thoroughly in future attending years would definitely be the Dragon Con gaming area. I had not yet been to the gaming area, and I had no idea it was such a large space full of so much! You could find anything in there from computers set up to play anything you wish to board games to old arcade games! Had I known the game area was so inclusive of almost any form of tabletop play, I honestly would have spent more time there. I just need to go with my friends who have been before. This convention was so spread out that I can’t remember what building and where the gaming center was!

One thing that I am sad to report was the fact that I, again, did not get into the vendor hall or artist alley this year. I know many people attend conventions for the artwork and a chance to take home some nerdy merch. I am definitely one of those people- personally, Artist Alley and the Marketplaces are my favorite- but I was not going to stand in line for 2 hours to get in. Atlanta, Georgia during Labor Day weekend has some rough weather whether you are in cosplay or in everyday-wear, so standing out in the direct sunlight for 2 hours for any reason isn’t something I would wish on anyone or put my health in jeopardy for.

The convention staff are continually mentioning how information and guides can be found on the Dragon Con App. If the convention was able to put a wait time on the app so people would know how long they would be standing in line for, or if they were to adopt a fast-pass system that would let fans come back at a certain time that they could get through the app, I think visiting the vendor building would be more of a possibility and less of a sweaty time for fans.

Overall, I feel that Dragon Con staff and services continue to improve to offer the best possible experience to each con attendee, which shows promise in a more enjoyable time each year. 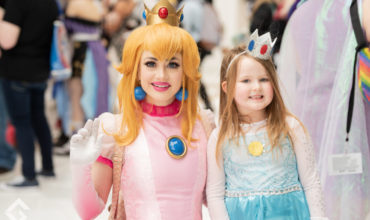 Is a Dame to Kill For Worth Killing for? 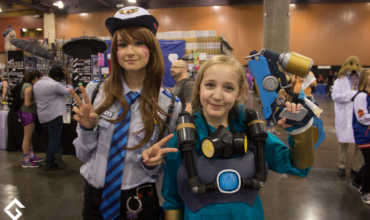 Cosplayer of the Month: Lindsay Elyse 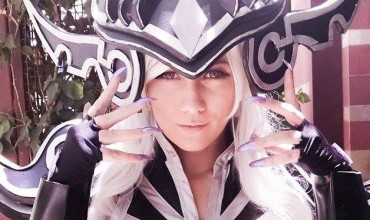