I have always been a huge fan of comic books as they are a cornerstone of geek culture with legends such as Wonder Woman, Spider man, Batman, Superman, and so

many others. Of DC and Marvel, I must say that I do heavily favor the work of DC Comics more so than Marvel due to such vibrant villains like The Joker,  Lex Luther, Darkseid, Sinestro. However, with both major comic book companies they faced the same issue of being so starved for diversity among their iconic characters.

While it is understandable that during their creation, featuring minorities would be a death wish for their projects because the country simply was not ready to embrace seeing men and women of various skin tones and ethic backgrounds as fully fleshed characters. Instead they were cast as thugs, side characters, or victims who needed to be saved by the overwhelmingly powerful Caucasian characters who knew so much more than everyone else and had the power to instill change.

Like all minority comic book fans,I grinned and bared the equal representation drought for years and can appreciate the great strides comic book creators are taking to include more diversity in already established characters or creating new ones. I always search for the more progressive comics that feature diversity and try my very best to support them in any way we can!

That was when I stumbled upon Trill League created by Anthony Piper. Trill League is a new series that is a parody of the more traditional Justice League and swap the culture from Caucasian to an urban feel. While the comic is meant to be a piece of humor, it shows so much potential to be more to fans. I just had to reach out to Anthony Piper for an interview and I was blown away that he said yes!

The Geek Lyfe: Although I have been a fan of yours for quite some time, there may be a few Geek Lyfers who have not seen your work before, would you be alright introducing yourself?

Anthony Piper: Yea, no problem. I’m a professional artist and writer from Chicago. I’ve worked on a few animated series as a character designer and have also written and illustrated a few stories for Marvel. I started off in the art business pretty much like every other artist who has come up these days — hustling my art online. However, I really got my initial acknowledgement doing album and mixtape cover art for independent musicians. However, that was never my goal. I really wanted to do character art stuff like comics and animation. Well, truthfully, I got back into art to create my own comic story that I had been imagining since I was a kid, but life got in the way — you know, things like bills, car notes, groceries, etc. LOL.

TGL: How long have you been an artist and what got you into it?

Anthony Piper: I’ve been drawing since I was a kid. My grandmother always likes to remind me of how I used to draw on the walls in the hallway when I could barely walk. Cartoons are what got me into drawing. Being a kid of the ‘80s, I was exposed to the Disney classics like Duck Tales and Darkwing Duck. The one that probably had the biggest impact on me is Teenage Mutant Ninja Turtles. I used to always draw them. But yea, I’ve always just been into creating things. Whether it was trying to make homemade water guns out of pop bottles (don’t ask), designing t-shirts, making beats, writing short stories, etc, I’ve just always been a guy who enjoyed making things.

From there, Trill League was born.

TGL: What is the origin story of Trill League’s creation?

Anthony Piper: Well earlier I said I was known for making album covers, right? Well one particular day, I was waiting for one of those album cover clients to drop his deposit so I could start, but he never did. Most of the day had passed, and I had previously been redesigning Marvel characters in urban/military-esque attire. So I decided to switch it up and do DC characters. I did a picture of Robin, but I “ emixed” him and infused him with design elements from a character that had been in my head for a long time (that comic project I mentioned I had been imagining since I was a kid). Anyhow, I had this new Robin doing stuff black kids do like dancing, playing basketball and some other “controversial” stuff, and the image ended up going viral. That was the most social media shares I’d ever received. That prompted me to start “remixing” other DC characters and giving them unique and humorous personalities. From there, Trill League was born.

Something I never even planned has gotten me further in life than the partial college education I’m still paying for (which is a lesson to young readers…never plan out your life. It’s pointless).

TGL: Did you plan on Trill League becoming so popular or was it’s success unexpected?

Anthony Piper: I definitely did not think it would get this popular. It is something that takes me aback everyday to think that this thing has gone this far. Something I never even planned has gotten

me further in life than the partial college education I’m still paying for (which is a lesson to young readers…never plan out your life. It’s pointless). Jokes aside, I think it was just a matter of perfect timing. I created Trill League at the exact moment the superhero genre was starting to take over the movie industry, so all eyes were on these heroes to be re imagined and reintroduced to us in new ways. I mean, we know Marvel is killing the game, but DC characters are some of these most popular superheroes of all time. People who aren’t even into comics know Batman and Superman’s origin stories. By just taking these things that people know and re imagining it to make it relevant to today’s society (and adding humor), I think it was just something that was destined to take off.

TGL: Although Trill League in it’s current form is very entertaining, I know that I and many other fans would like to see so much more from Trill League. Do you have any special plans to take Trill League to the next step?

Anthony Piper: I’m in the process of finishing up the 1st graphic novel. It’s been taking me awhile to get it finished, but I’m almost at the finish line. I’ve also been fortunate to get the attention of some deal-makers in Hollywood, so I’ve been able to pitch Trill League to a few networks to possibly get it turned into an animated series (which if you think the property is funny now, just imagine what could be done if these characters can be brought to life with animators and voice actors). However, that’s a big proposition, so I’m not sure if it’ll take place since that’s millions of dollars I’m asking someone to invest into the property. I’m optimistic though. Regardless of that, Trill League will be continuing for awhile through the serialized comic and web comic drops.

TGL: When you aren’t doing art, what do you do in your spare time?

Anthony Piper: Man, I actually had to google what spare time was. I forgot. Since I’ve been doing the serialized comic story, web comic, and animated series pitch (all 3 are handled in different ways), I rarely get spare time. It has definitely been a time-consuming journey juggling all 3 as well as trying to keep this up as a business. Luckily all of the hard work may take Trill League to the next level come this year, so that is really what keeps me working hard on the property.

Anthony Piper: I’d say cartoons definitely. Mix that with music (I wanted to be a music producer back in my college days), and I think you can see how and why Trill League came to be. Cartoons were a way to escape into a fantasy world. I mean, in real-life, we have limitations on the things we can do, what we can say, how we can act, how we can look, etc. In animation, all of those limitations are non-existent. Animals can talk, people can fly, entire societies can be created. In terms of being a creator, cartoons are the ultimate medium in my opinion.

TGL: If you had to defend the world as one of your Trill League characters(You’d have to face their nemesis as well), which one would you become and why?

Anthony Piper: Probably Swolemayne, who most of my friends say I based on myself, which is partially true. I love Sparrow, but he doesn’t have powers. Swolemayne is pretty much Superman, and who wouldn’t want to fly and be super-strong.

TGL: Out of all the characters you have created, which one is your favorite and why?

Anthony Piper: Sparrow for sure. He’s sort of like me in a sense. If I could go back in time as a kid and retain everything I know now as an adult, Sparrow would be me. He’s a smart ass, but he disguises his asshole ways as naivety. Add in the fact that he’s sort of a play on a character that I created back in 1st grade, and you can see why he’s very important to me.

TGL: What advice do you have for any aspiring artists out there?

Anthony Piper: Hustle. Art is a career path that has a lot of value to society, but it is not treated like other professions like law, engineering, or medicine. You can’t just study art and think you’ll be given a job. You have to create something society wants, and that doesn’t necessarily facilitate going out and getting a degree (which is why I don’t advocate going to college for art unless you can afford it for sure). I can honestly say I’ve learned more about how to become an asset in my current profession from books, online tutorials and YouTube, than I did from my 90 credit hours in college. If you’re an aspiring artist and you want to work in comics or animation, just draw as much as you can and focus on getting better everyday.

I want to give a huge shout out to Anthony Piper for everything he is doing with Trill League! At multiple points I have bought almost everything I can regarding Trill League because I absolutely love what it is. I have no doubt in my mind that it will succeed if given the proper attention and tact. Be sure to check out more of Trill League at their website and Facebook! 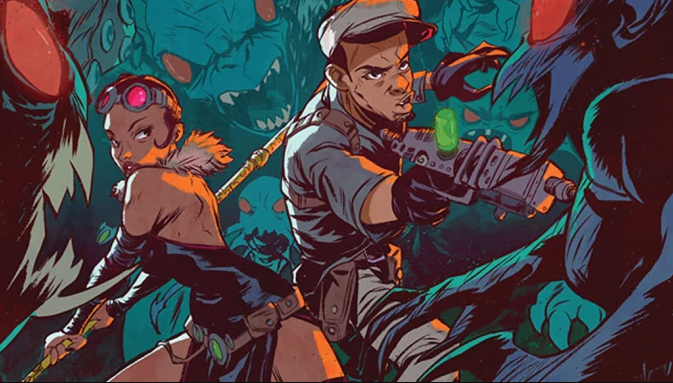 Beloved ‘Bitter Root’ Series in Development for a Film 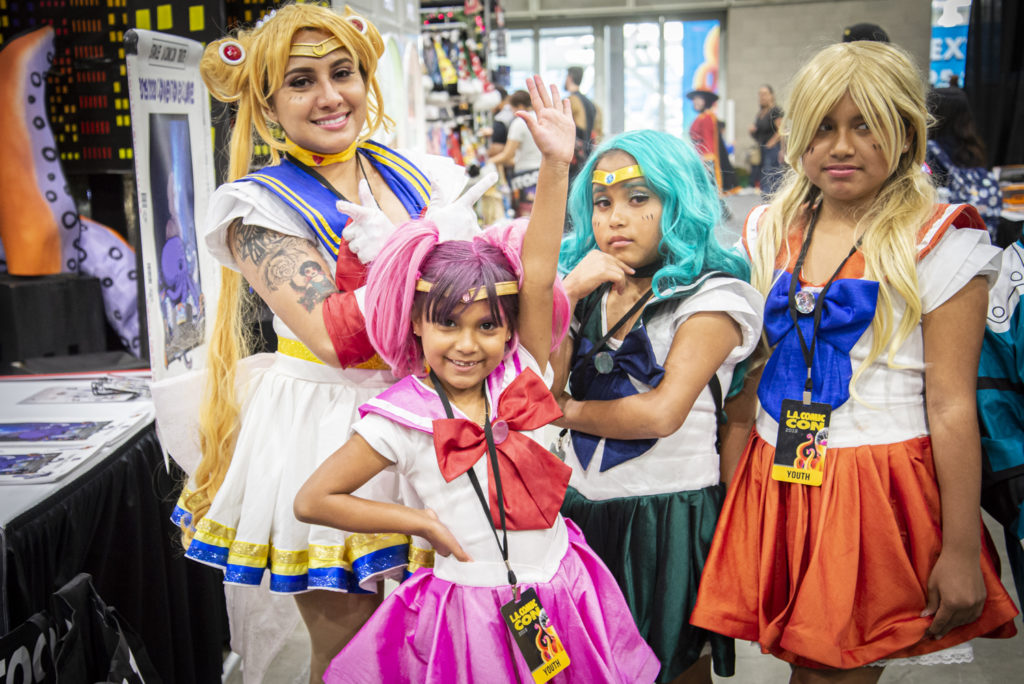