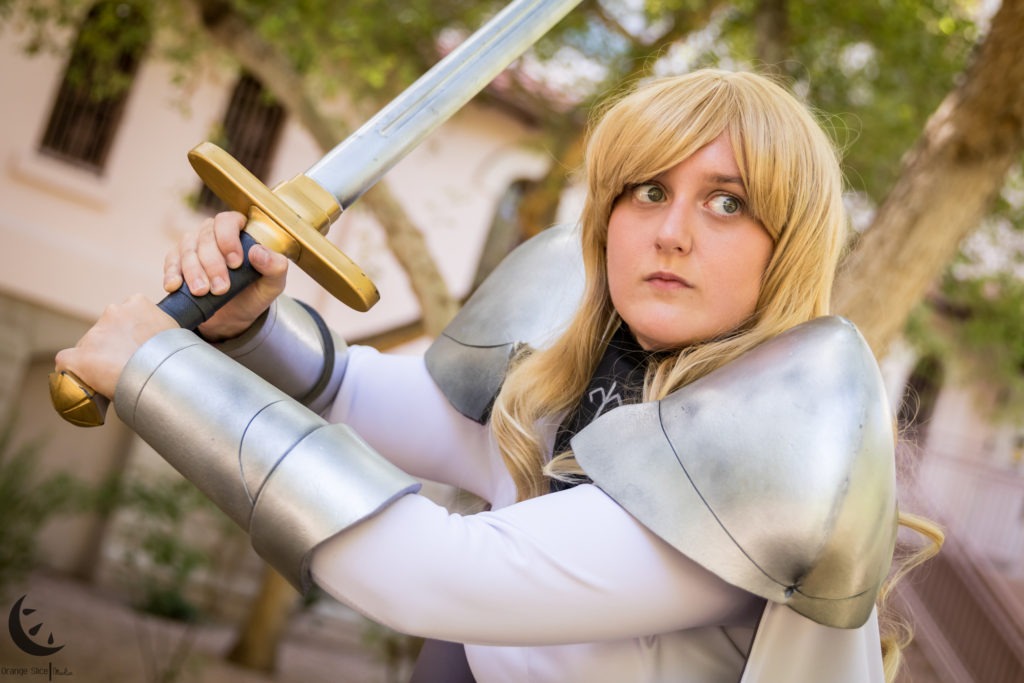 Cosplayer Of The Week: Thermo Cosplay

Welcome welcome welcome! I hope you all had a fine week! We have a fantastic cosplayer for you by the name of Thermo Cosplay! She is local to Arizona and does a wonderful job at creating awesome costumes with her and her friends. I have seen her around quite a few times but never really got to appreciate her until I saw her Mass Effect cosplay at Game On Expo 2017 where she came as Thane!

We were stoked when she was up for an interview with us!

The Geek Lyfe: Although I am a fan of yours, there may be a few Geek Lyfers who have not seen your work before, would you be alright introducing yourself?

Thermo Cosplay: Absolutely! My name is Sam and I founded ThermoCosplay is 2014 with the intention of sharing cosplay crafting, convention experiences and just general good feels with 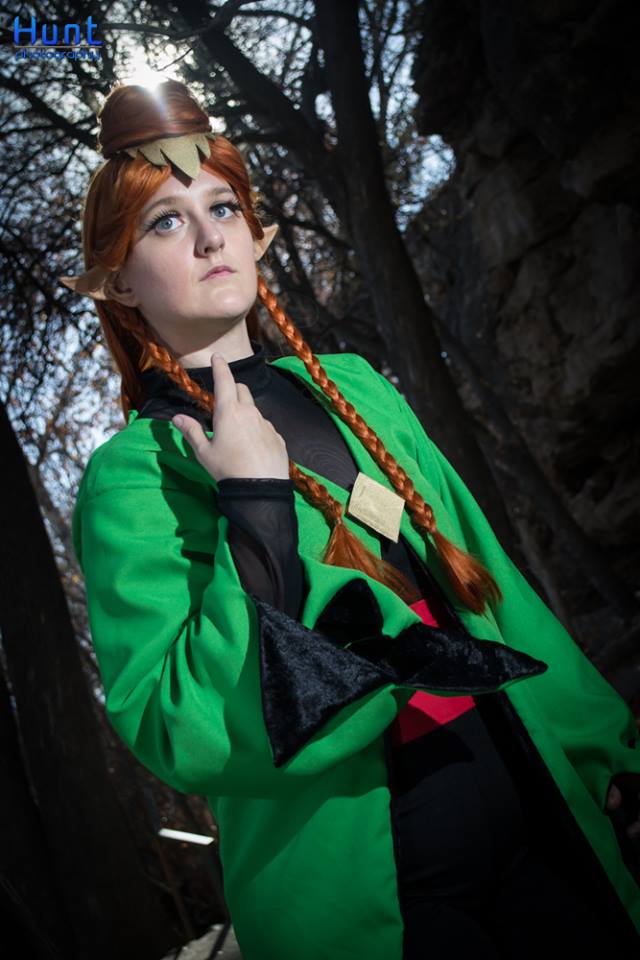 the world. I am joined by my husband (Lawrence – the financial wiz kid) and my long time friend Lina (fellow ThermoCosplay costumer) frequently at events. I am a professional IT Project Manager but I have a background in traditional art and animation that has allowed for my costuming endeavors to flourish. I LOVE comic books, write for FanGirl Nation Magazine as their Cosplay Savant AND volunteer for the 105th Squad Phoenix. As far as cosplay goes I am BIG into anime and really enjoy Bioware/Bethesda video games so a majority of my costumes reflect that. I hope that covers everything 🙂

TGL:  I’ve followed you for sometime yet never learned the origin story! Could you tell us how you got into cosplay and what led you to where you are now?

TC: Ah, ye old origin story. Well, I went to my first convention in 2011 and by 2012 I had a booth selling comics I was drawing. Despite my success I never really connected with the crowd as well as I wanted. While managing that booth my sister showed up as Sookie Stackhouse from True Blood. I was familiar with people dressing up for conventions but never really put my finger on what is was called. A year later someone told me about Kamui Cosplay. After a few months of following her and reading her tutorials I was hooked. In March of 2014 I started my first cosplay (Demon Hunter from Diablo III) using Kamui’s tutorials and some guides I discovered on Thermoplastics. I attended Phoenix Comicon that year in my Demon Hunter and received such positive reactions that I set my mind to creating more costumes. My next event was Saboten, then Fan Fest, then Taiyou Con, etc. As the list grew so did my costume building and I found a passion that combined all of my creative skills into one. Cosplay also helped boost my confidence which gave me the strength to lose the remaining 50 lbs that I was struggling with over my 3 year weight lost journey (total of about 100 lbs lost) so that is yet another reason why I can’t seem to quit it (not that I want to, mind you).

TGL:  What has been your favorite moment so far cosplaying?

TC: Ooooo…that is tough. I have had A LOT of amazing moments. I suppose the one burned into my mind is a more recent event. I dressed as a Rule 63 Thane Krios for Game On Expo 2017 and while walking to Pre-Judging Mark Meer (the voice of the male Commander Shepard in Bioware’s Mass Effect series) did a b-line for me and complimented my outfit. I said thank you and tried to keep walking but he insisted this was an important moment and introduced himself (my lenses were fogged so I could not see well at the time). When it dawned on me who he was I fought hard not to Fan Girl. He asked me to follow him to his booth but I could not as I was due for judging. Mark said he would wait at his table for me and sure enough, once I made it back over there he greeted me with great enthusiasm. Mark had nothing but nice things to say about the silicone prosthetic I had made and took photos with me to commemorate the moment. I later was told that he is a BIG mask enthusiast so receiving compliments on a mask build is something to be honored by. I am still riding that high lol.

TGL:  What is the most frustrating part?

TC: Honestly that would have to be my determination. I am so determined to meet self imposed deadlines for events that I sometimes burn myself out or run into anxiety issues. I am doing it far less this year than last but it is something I struggle with. Crafting, Fabricating, Sewing, Styling…all of those are learning experiences and even when I make mistakes I enjoy the errors because I will not repeat them again. Emotional tumult is not something I enjoy so when I pushed myself too hard I typically feel as though I’ve let my Fans down and myself (I am a little too hard on myself sometimes). Changing that perspective has been difficult but I am finding cosplay more rewarding when I look at it more as a hobby to inspire others and less as an obligation to support them.

TGL:  Is there one situation in your Cosplay career that makes you laugh when you look back on it? If so, what is it?

TC: Oh yes there is. At Phoenix Comicon this year I made a Cassandra Alexandra cosplay and wore tights under my custom thigh high boot covers. ALL DAY those dang thigh highs kept falling down. I could NOT figure it out. Finally, as I was sitting down before my photo shoot and cooling off in my car it dawned on me that I made the thigh highs to stick to my SKIN. I was smart enough to double up on shorts so I could remove the bottom portion of the costume and the tights without flashing anyone. Once I had the tights off and the boot covers back on I had NO trouble with them. It only took me about 7 hours to figure that out… #cosplaywoes

TGL:  When you aren’t doing/making costumes or making videos, what do you do in your spare time? 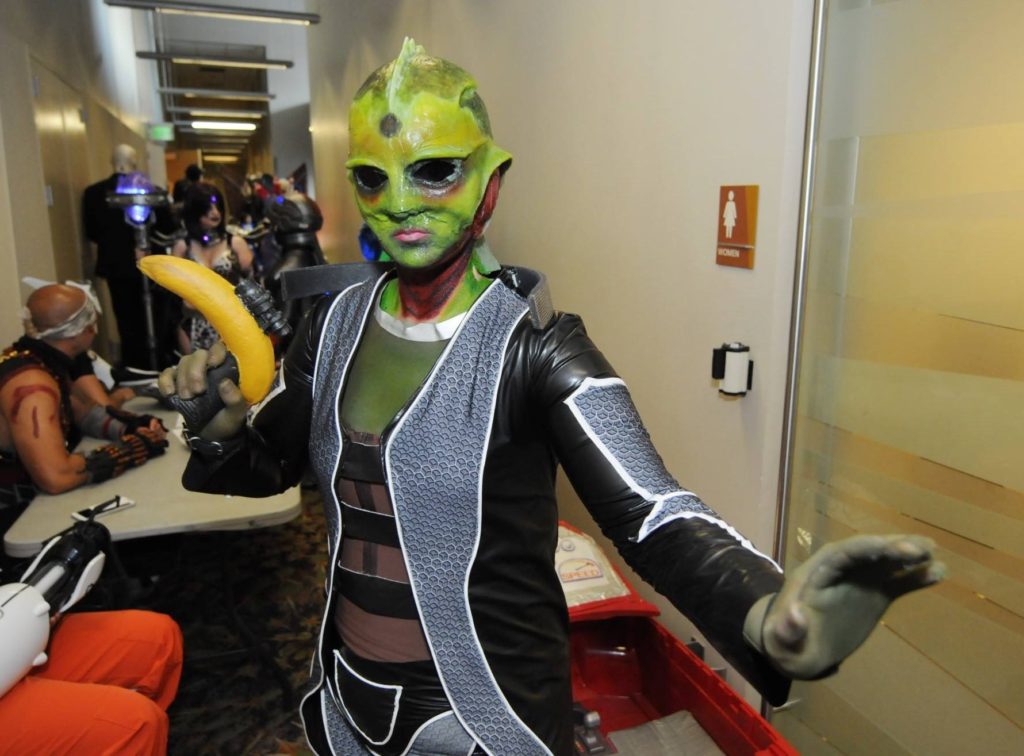 TC: I have LOTS of hobbies. Once my work day is over (Project Management comes with long hours some weeks) I often will draw, read or write. I enjoy writing tutorials and review articles for FGN. When I am not creating in some fashion I am exercising. When I am not exercising or when I am worn out I have a chill day on the couch with my favorite video game. There is rarely a moment in my day when I am NOT doing something mentality stimulating. I am just a very energetic person I suppose.

TGL:  What geek medium(Video Games, Comic Books, Novels, Movies etc.) made the biggest impact on your life and why?

TC: ANIME. Anime seriously helped me during Middle School, High School and even some parts of college. Miyazaki warmed my heart. His movies were inspiring and encouraged me along my creative paths when I was feeling lost or down. I also rather enjoy some of the Gundam animes and manga has played a big part in my artistic styling. As an adult I find myself more motivated by video games and the racially diverse comics coming from newer Indy publishers. There is also ElfQuest…that comic series helped me overcome nightmares as a child, endure hardship as a teen and find my path to peace as an adult. I SERIOUSLY recommend those comics to anyone looking for a new series.

TGL:  If you could take on the powers of someone you previously cosplayed as, who would it be and why?

TC: Nora Valkyrie. I live in Arizona. We have LOTS of lightning. I’d be a friggin power house. Plus…she’s Nora. I LOVE Nora.

TGL:  Which cosplay do you hate to wear due to being uncomfortable the most but love to have worn it for photos and conventions?

TC: That would be a mix between my Demon Hunter and my Twi’lek. The Demon Hunter is HOT and I have to take pieces off to sit in it (plus using the bathroom is tricky). I also have a limited field of vision when I wear my hood/cowl and I have been groped SO MANY FRIGGING TIMES in that cosplay. I blame the leather leggings. My Twi’lek just requires A LOT of make up prep and the head piece weighs on you after a while…also, you tend to start bleeding color after a 8 hour period to makeup re-application is a hassle.

TGL:  Do you have any projects in the near future we should be excited to see?

TC: YES. I have two BIG ones for next year that I am SO EXCITED for. I am aiming to have Oruha from Clover done by January in time for Taiyou con. I am also starting plans for a very special Mass Effect Andromeda cosplay. Ok, I can’t hold back: Moshae Sjefa. She’s an Angara ancient and she is SO COOL.

TGL:  What advice do you have for aspiring cosplayers?

TC: Take it slow. Do your research. Start small. Wear something you LOVE. Don’t start with a group cosplay (they are fun but add undue stress for a first timer). If you don’t know how to sew then get something from a thrift store (tear it apart, alter it, mess with it…the beauty of inexpensive items). Most of all HAVE FUN. Cosplay is meant to be a pleasure.

We want to give a huge shout out to Thermo Cosplay for taking the time to answer a few of our questions! Be sure to check her out on Facebook and instagram! 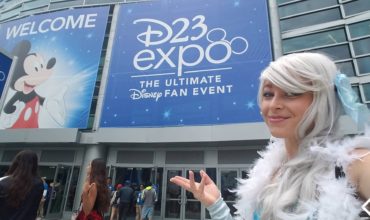 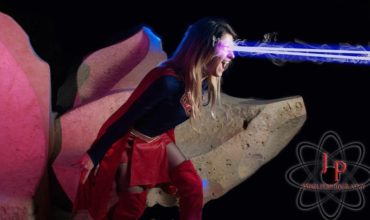 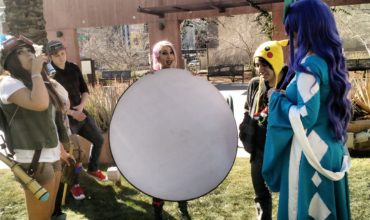 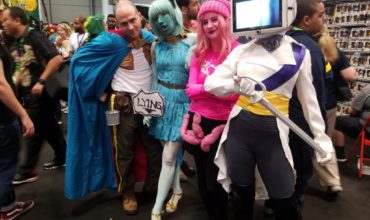