Five comedy anime YOU should be watching!

I’ve been really into comedy anime lately and thought that I’d compile a list of my top favorite MUST see comedy anime. I guarantee that these anime will give you at LEAST a few chuckles, if not a few ROFL sessions. Without further ado, let’s rock! 😀 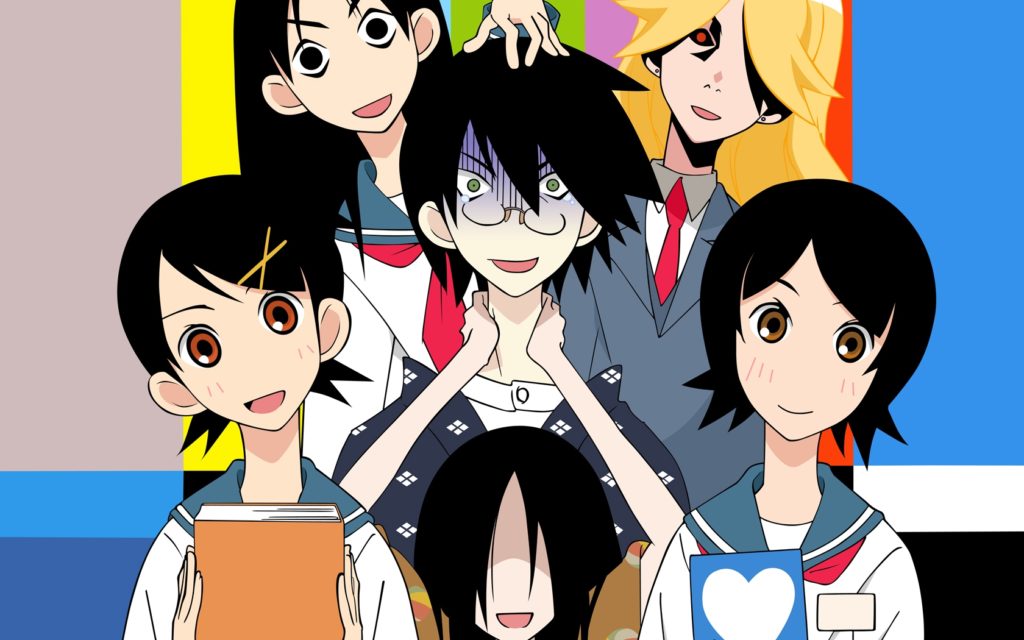 Where to watch: Sadly, I don’t think this anime was popular enough to be picked up by any major anime distributors here in the states! However a lot of unofficial hosting sites have all 3 seasons! It just takes some searching (^u^)

How many seasons? 3 seasons and an OVA

This anime’s name quite literally translates to Goodbye Mr. Despair, which pretty much sets up the show. Nozomu Itoshiki is a perpetually depressed high school home room teacher whose class consists of every anime girl troupe you could possibly imagine. The anime follows Nozomu as he teaches his class about pessimistic life lessons, different aspects of Japanese culture, or wordplay. Plus there are just TONS of tributes to other anime and Japanese movies in this series. SO MANY. It’s so satisfying to watch this show and go “Ohhhhh that’s from ____!!!”.  So if you’re in the mood for learning about Japanese culture, seeing a bunch of hilarious parodies or screaming “I’m in despair” on the daily, then this anime is right up your alley. PLUS the openings are done by anime OP song legend Kenji Ohtsuki. (Im humming the first season’s opening as I type!) PLUS the main character Nozomu Itoshiki is voiced by voice actor Hiroshi Kamiya ( Yato from Noragami, Koyomi Araragi from the Monogatari series and Levi from Attack on Titan).

Here’s a Phoenix Wright Ace Attorney parody of the opening that the animators of the series did JUST because they love that game so much. Check it out!! (I apologize for the quality of the video! I just can’t find any good ones anymore…) 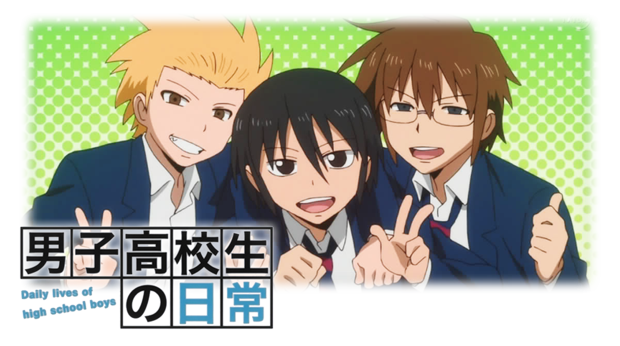 Where to Watch: Hulu

Number of Seasons: 1 and a live action movie (Haven’t watched that yet though)

This comedy anime focuses on the lives of three boys, Tadakuni, Hidenori and Yoshitake, who attend an all-male high school. They go through their days and learn about girls, go to school and attend events. Each episode contains multiple shorts so there is usually no continuous story line. Daily Lives of High School Boys is just plain fun. The bromances are strong in this anime, which is frakking awesome! I really don’t know how to describe this anime besides just plain hilarious.

I warn you to be careful about eating or drinking while watching this show, I’ve spewed my drink out a couple of times from laughing at the antics on this show. Also the ending theme is just awesome. Here it is if you want to get a taste of the silliness that is this show. 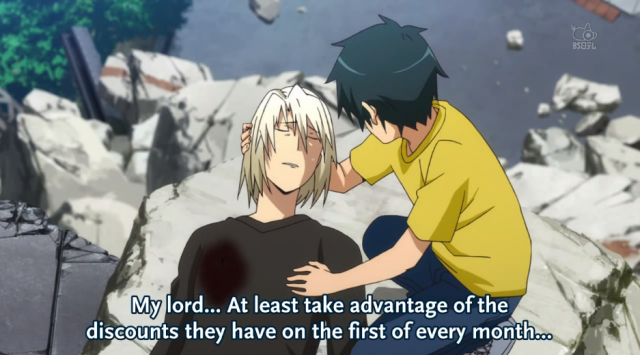 3.The Devil is a Part Timer

Where to watch: Funimation Streaming and Hulu

The Devil is a Part Timer mixes two of my favorite genres, comedy and fantasy. Now imagine that the Devil has escaped from his world only to end with no magic and not a penny to his name. Now imagine him working at McDonald’s…and enjoying it. This is sersiously the plot of the Devil is a Part Timer and I couldn’t love it more. Just a few of the things you can look forward to are:

And so much more. This series is based off a light novel and even has a manga if you want more part timer goodness. After watching this anime you’ll never pronounce katsu don the same way. XD 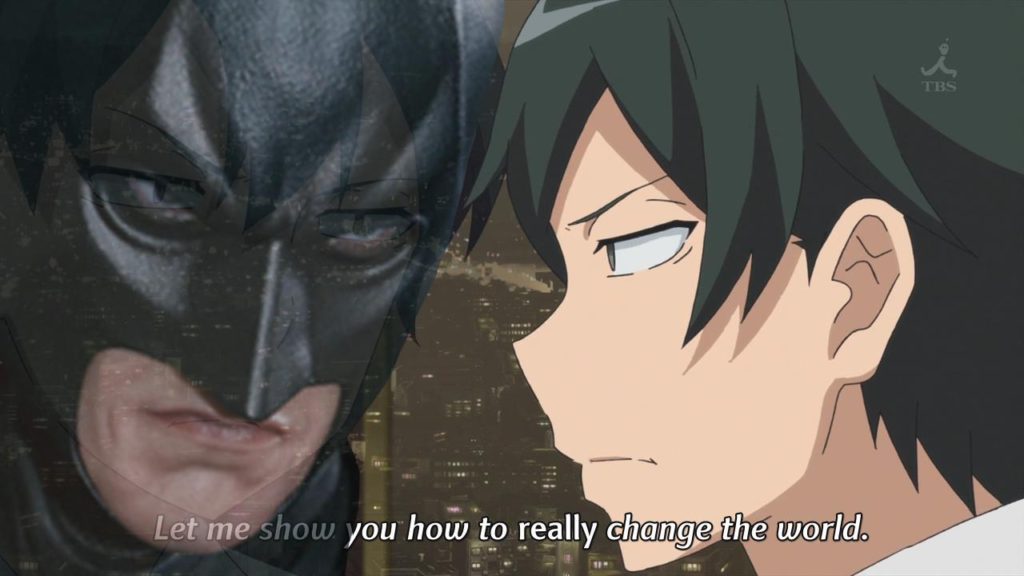 Type of Comedy: Romantic School Comedy (The title really says it all LOL)

Where to watch: Crunchyroll and Hulu

My Teen Romantic comedy SNAFU has one of my favorite anime characters in it!! Enter Hachiman Hikigaya, the ultimate antisocial nihilistic high school student. After writing a less than stellar essay about his high school experience so far Hkikigaya is forced by his advisor to join a brand new club called the Service Club. Also in the club is the school’s number one student Yukino Yukinoshita who is a cool, but extremely standoffish beauty. The two loners of the school are forced to solve the problems of students who approach the club for help. The pair solve the often time hilarious problems that other students have in unorthodox ways. However since Hikigaya is unwilling to change in his ways he still manages to help people while maintaining his extremely negative outlook on life. WHICH IS JUST AWESOME. This anime mixes real problems with funny anime problems for a really unique series. Plus Hachiman Hikigaya has some of the best lines EVER. It’s a very bittersweet, yet funny show that I highly recommend! 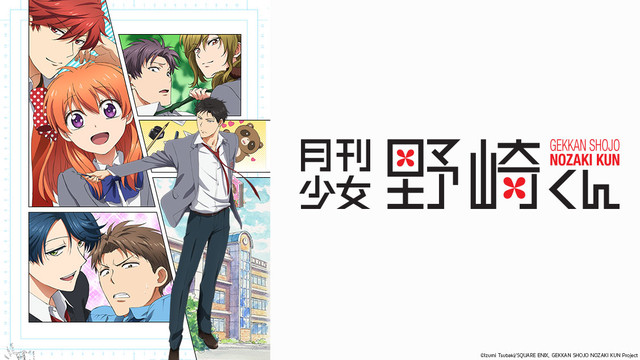 Where to Watch: Crunchyroll and Hulu

Okay guys… this is my all-time favorite comedy anime!! Main character Sakura Chiyo has admitted her affections to her secret crush the stoic Nozaki Umetarou, only to be handed his autograph. Turns out Nozaki is a famous shoujo mangaka! Sakura ends up becoming one of his many assistants and learns the ins and outs of the manga world all while trying (?) to get closer to Nozaki himself. Monthly Girl’s Nozaki Kun makes fun of the absurdities of shoujo manga and otaku culture SO well. It’s all so darn relatable! Plus the cast is just great. My favorite character has to be Nozaki’s special effects assistant Mikoto Mikoshiba, the self-proclaimed playboy who is secretly a massive otaku. However, I really love each and every character in this show. I’ve nearly lost it every episode, it’s THAT FUNNY. But don’t take my word for it, check it out ASAP! 🙂

Here’s a sample meme to get you hooked: 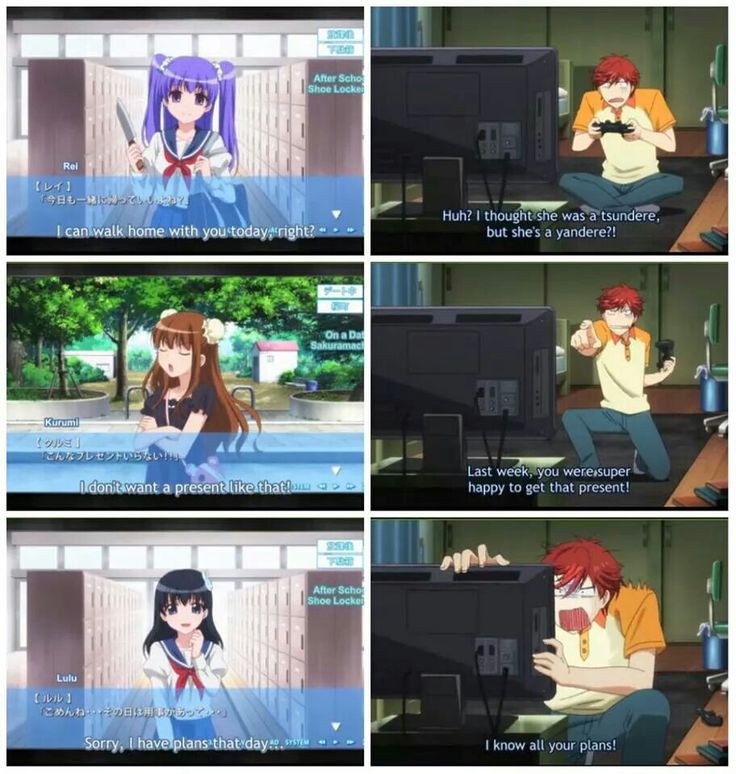 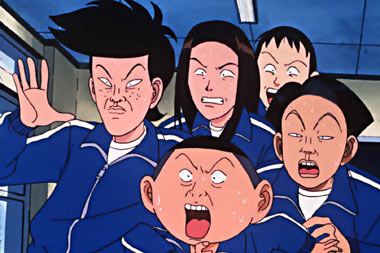 Where to Watch: Same thing as Sayonara Zetsubou Sensei… Scour the hosting sites or check Amazon for the dvd’s if you’d like! 🙂

Not to be confused with the coming of age sports story called “Ping Pong”… This anime focuses on the misadventures of the boys in the Inaho Ping Pong Club. I love me some crass, over the top and just plain vulgar anime that the 90’s gave us. Ping Pong Club has all of those traits and MORE. This anime is seriously not for everyone. If you get through the first episode and have a bad taste in your mouth… DO NOT PROCEED. But if you enjoy this sort of just plain crazy anime, I highly recommend this.  Also any anime that has a main character that is always talking about his “glorious ass” cannot do any wrong in my book. XD

Welp! There’s my list guys! How many have you seen? Are there any of your favorites that I missed?

Let me know in the comments! 😀 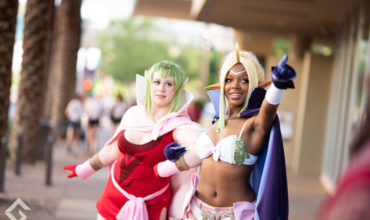 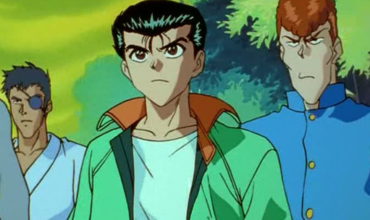 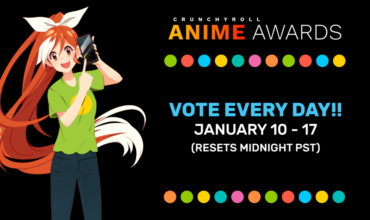 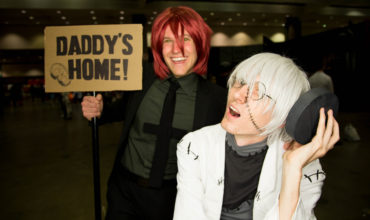