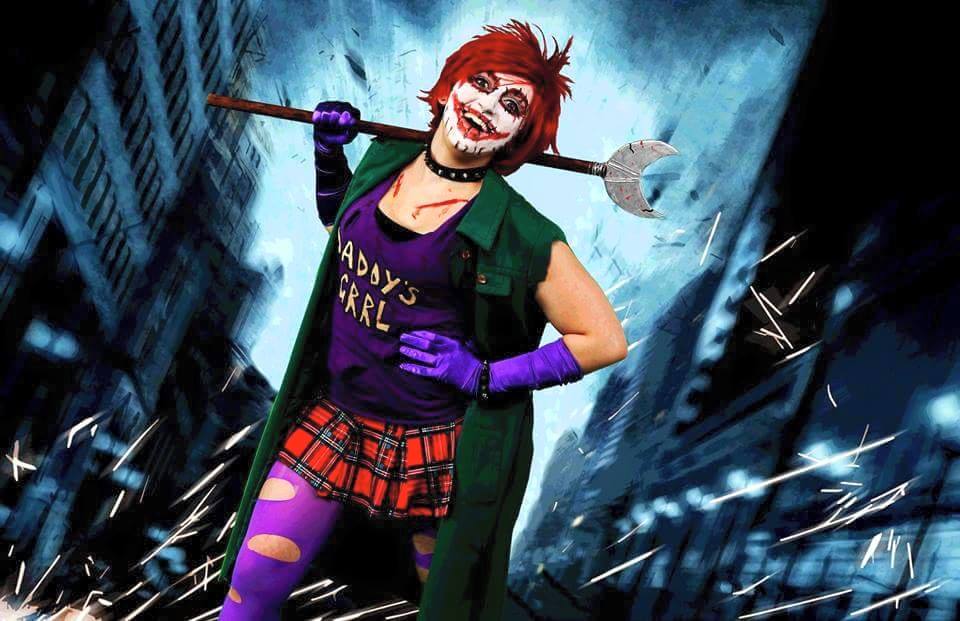 During Phoenix Comicon I vowed to make a hard push to get the Geek Lyfe’s name out there. I had a list of people who I wanted to interview and hunted them down all convention. One of those names was Lindsay Elyse, a well known cosplayer who is a local from Arizona. I visited her booth a number of times, almost every time she was surrounded by fans. The first few times I simply walked on, after that I stayed at the booth and hoped the crowd would thin. While standing by the booth I noticed geeky art work that was great quality and had great pieces from grand paintings to small Pokemon refrigerator magnets.

I immediately  asked for the artist, bought a few pieces, and requested an interview. She accepted my humble request with enthusiasm and we were able to get in connect for the interview. She was a great person, incredibly kind, funny, and talented! Here it is:

The Geek Lyfe: Although I have met you, seen how awesome you are, and love you, there may be a few Geek Lyfers who have not seen your work before, would you be alright introducing yourself?
Kylie LaRee: Of course! My name is Kylie LaRee, I am an artist. I like to do a ton of different types of art and am currently looking to expand on digital art so I could get my degree in Game Design! 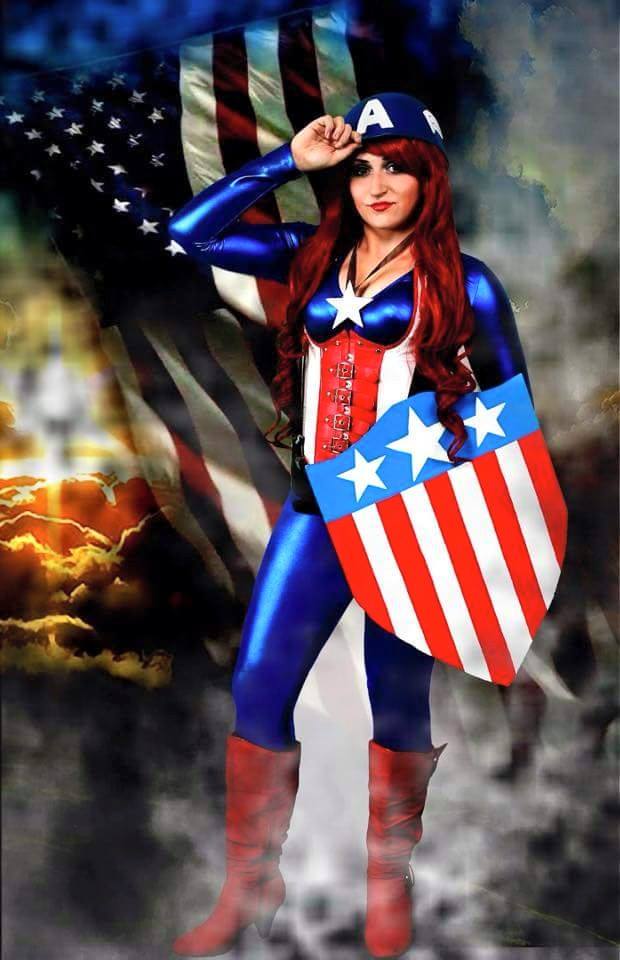 TGL: How long have you been into making costumes/artwork and what led you down this path?
KL: I have been drawing and sketching for as long as I can remember. I do a lot of commissioned sketches for people and was a super art dork throughout school. I took art classes every year! I started painting on actual canvases about 4 years ago when my brother wanted a very specific Majora’s Mask canvas. Prior to that, I had finished my apprenticeship at a tattoo shop in 2012, but chose to not continue working in a shop after that due to a somewhat uncomfortable environment caused by another apprentice, who shall not be named… or we could call this person “Voldemort.” I still do occasional work on the side because I do love it!
As for costuming, I was introduced to that by Lindsay Elyse. I had no idea that Cosplay was even a thing or that she was even known for Cosplay when I met her. She invited me to go to Amazing Arizona in 2012 and we ran through the convention and she showed me how awesome everything was! I was dressed as Evil X #4 in a group of Scott Pilgrim characters. Before that, I would make my Halloween costumes, and just get super hyped up for Halloween! I RARELY bought costumes! But I suppose I didn’t really start making/sewing costumes until 2012, so I have only been making them for 3 years. YEAH, MATH!!
TGL: What has been your favorite moment?
KL: I made a super girly version of Sonic the Hedgehog and a matching Tails for my sister, and it expanded into a group for the 2012 Phoenix Comicon. I handmade the spikes, ears, and tails for both costumes and it was my first time doing it. People were so kind and we got stopped for pictures throughout the entire day! It made all of the hard work so worth it! It took months to make the two costumes (and way too much money!) and it made me feel so special when kids wanted pictures with me!
TGL:  Most frustrating?
KL: Since I only just got a sewing machine (within the last year), I am still getting used to the sewing portion of making costumes, which is of course most of the process. I bought a cheap sewing machine since I was a beginner and it seemed simple

enough. Nope. That little thing jammed on me and ruined multiple costumes!! It was SOOO discouraging, and probably one of the most frustrating things EVER!! Since then, I put the money into a much nicer sewing machine and so far, it’s amazing.
TGL:  When you aren’t doing this, what do you two do in your spare time?
KL: I pretty much draw as much as possible! Haha. I do (*cough*try to*cough*) workout as much as possible. I am enrolled in Taekwondo classes at ATA, I go at least twice a week and I LOVE IT!!! But other than that, I pretty much just sit around drawing, playing video games, or playing with my ferrets!
TGL:  What geek medium(Video Games, Comic Books, Novels, Movies etc.) made the biggest impact on your life and why?
KL: Most definitely video games! I have three older brothers, an older sister and one younger brother who I played video games with growing up. We had a Sega Saturn, Genesis, Playstation 2, Nintendo 64, Nintendo Gamecube, Gameboy Color, and so many others. I really loved to play Powerstone on the Sega Dreamcast, (which I think is a super underated system and also one that we didn’t own) ALL of the Super Smash Brothers games on Nintendo 64 and Gamecube, also Conker’s Bad Fur day! I really loved pretty much any Pokemon or Sonic the Hedgehog game. But the biggest thing we did was L.A.N. the first Halo on Xbox!!
I can’t even count the nights where we stayed up all night with two teams of four on eight separate systems, drinking mountain dew and eating pizza!! I grew up on Halo and it will forever be a part of my fondest memories! My family had a L.A.N. center for a short period of time where we held video game tournaments and would do our own mini MLG Halo 2 tournaments. I met a lot of my friends that I am still close with today through Halo, and I am super close with all of my siblings because we all play video games together! So video games have impacted my life super positively! I definitely would not be who I am or have the same relationship with my friends and family with out the time we all spent together playing video games.
TGL:  You gather all seven Dragon Balls(Earth), what is your one wish?
KL: Ohmaigawd… This is a tough question. *brain explodes* I would probably wish something that would benefit more than just me… or just be super weird. Something like, ‘I wish all fantasy creatures were real’ … that would cause some havoc; could you imagine a place where Pokemon, Zombies and superheroes existed?! BUT if I was going to be selfish with it, I would probably wish that I could do anything I wanted. Then I would learn every language, fly around the world, fight crime, have tons of money, and do whatever I want. Haha… I think that doesn’t really go with the rules of the Dragon Balls… BUT I DO WHAT I WANT!!!
TGL: Do you have any projects in the near future we should be excited to see? 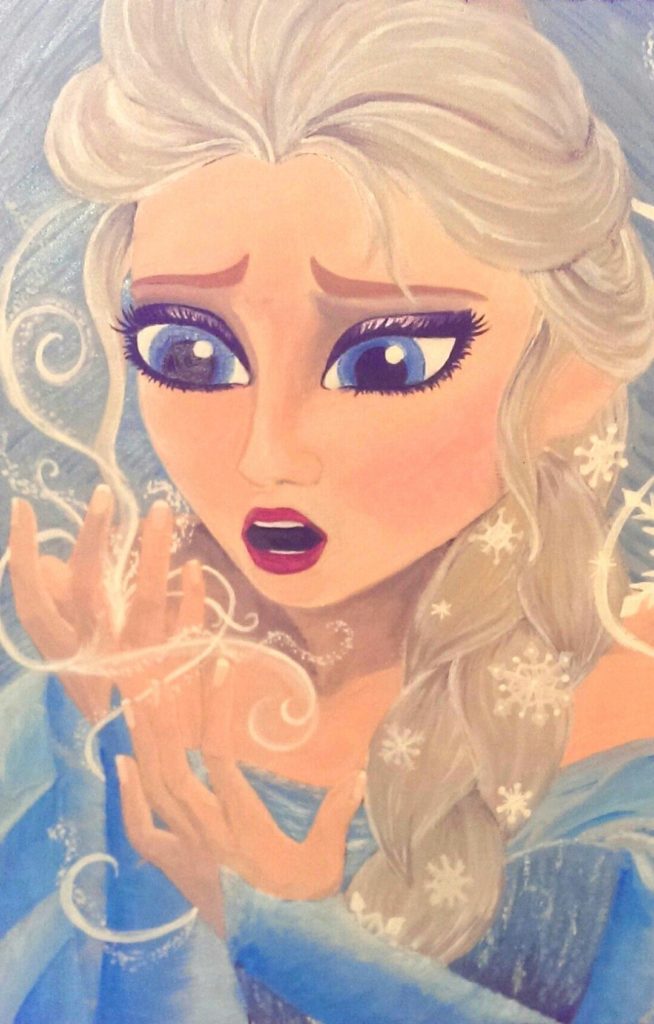 KL: I am going to try and get better with sewing, and so my next costume in mind is another version of Sonic the Hedgehog or my own version of each Eveelution (because I love them!!!), I will be doing more cosplay make up ideas, and I will be doing WAY more digital art!! I have a lot of crossover sketches in mind! I will be making short videos of things I make and my random nonsense adventures to complete projects!! So LOTS of new things!! Come watch me succeed or fail at new projects! IT’S GOING TO BE SO FUN!!!

TGL:  What advice do you have for any aspiring artists out there?
KL: Ignore the jerks, take your time, and don’t do it for money. I have gotten down on myself WAY TOO MUCH because people have commented mean things about some of my beginning cosplays, and there are people that don’t know the difference between constructive criticism and being insulting.. and they don’t care most of the time. They just aren’t worth your time, so it’s best to just not focus on it; which we all know is easier said then done, but it’s important to learn to ignore haters!

Take your time with your art, whether it be cosplay, sketching, learning an instrument, painting, digital art, photography, etc. I cannot stress how important it is to take time to learn about your craft. No one gets good at a talent over night and you can never stop learning and growing as an artist. This kind of goes hand in hand with not doing it for money. If you rush something that you are learning, and then try to sell it, it’s going to show in the finished product and you aren’t going to sell anything. Art is a competitive field and you need to take your time to find your groove, style and what sets you apart from everyone else. Also, if you are doing something strictly for money and you don’t know what you are doing, you aren’t going to enjoy doing it. Just relax, have fun, and take your time doing something you love, and do it BECAUSE you love it!

Kylie LaRee was a wonderful person and someone you should defintely keep an eye out for in the future! If you’d like to check out more of her work you can visit her Facebook!

Cosplayer Of The Month: Chris Riley 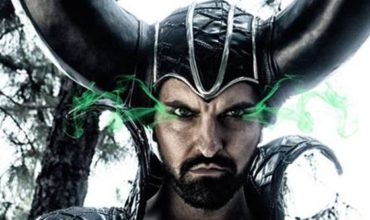 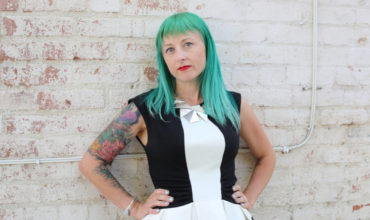 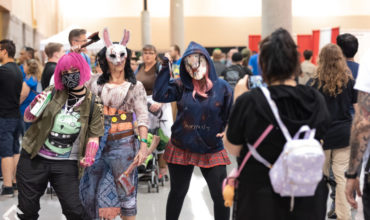 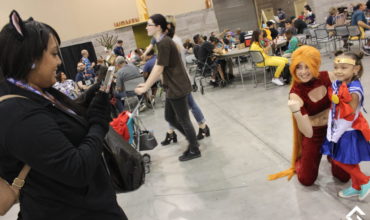