The Disappointment That Was Con Nichiwa 2019

Weebs and water parks are usually a pretty fun mix, and a mix-up of the ordinary! When Con Nichiwa announced last year that they would be holding their annual convention at the beautiful Starr Pass Resort in Tucson, I was ecstatic. I was lucky to attend Colossal Con in 2018 and it was a blast! Lounging at the pool in pool-safe cosplay was one of my highlights of my year. I was greatly looking forward to a repeat of that experience right here in Tucson! In this review I will get into the nitty gritty of what worked with Con Nichiwa “The Beach Episode” 2019, and what really, really didn’t.

I have been fortunate to attend conventions at the Starr Pass Resort a few times in my time of living in Tucson, once last year at SpaceFest and a few other, less nerdy events. I kind of knew what to expect going into this year’s Con Nichiwa as far as layout and flow of the event. The space is sprawling, and considerably less cramped than the Tucson Convention Center, which Con Nichiwa grew out of a few years ago but was still trying to make work.

The panel rooms at the resort are close by the main vendor hall, and the food truck vendors are just a short walk away as well. It’s a beautiful backdrop for many types of cosplays, but we’ll get into the problems with that fiasco later. I think ultimately, it was a very wise move to relocate Con Nichiwa here based on the space alone and feel of the venue, it was a wonderful upgrade to the space they were trying to fit in before at the Tucson Convention Center.

Con Nichiwa 2019 was marketed, through and through, as the “beach episode”. This insinuated that the resort and its amenities would be open to guests of the convention. Much to the surprise of the attendees, this was not at all the case. No convention guests were allowed in the pool area unless they were staying at Starr Pass. This came as a big shock to local attendees like myself, who had no plans to stay at the hotel since I live just 20 minutes from the resort. Once I found this out I thought, okay fair enough, then just the attendees staying there can hang out by the pool in cosplay and get shoots done? Good thing I didn’t pack my swimsuit! But I was wrong again, even paying guests of both the con and the resort couldn’t go into the pool in swimsuit cosplays or even be photographed by the pool, cosplays or not.

This detail came to a shock to many attendees who planned their entire cosplay “lineup” around the pool theme. The attitude of the con soured after this news spread. Many guests were wandering around in swimsuits for ultimately, no reason at all. The Con Nichiwa staff’s response was defensive, claiming they never mentioned that guests would be allowed in the pool in cosplay. Though all of the art advertising this con depicted cosplayers in, you guessed it, a pool. Hotel staff was obviously not prepared for the type of crowd that an anime con invites either, often reacting rudely to questions or just generally being unhelpful. This is not something I experienced personally, but it was not surprising in the least to me.

Monkey Paw staff posted an apology of sorts after it’s closing ceremonies were over, saying they hope the attendee’s experiences wouldn’t deter them from attending Con Nichiwa in the future. They also announced that Con Nichiwa would not be returning to Starr Pass Resort, and that its new home would be the DoubleTree Hotel at Reid Park. This new location is about as central as it gets in Tucson, and I have high hopes that they will redeem themselves with this new location. 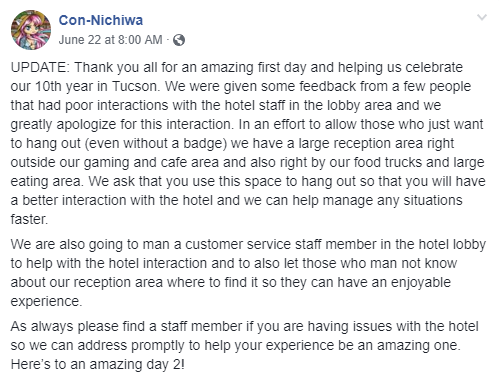 At the end of the day, paying guests of this con tried to make the best of it, we enjoyed the usual sights of an anime con: panels, vendors, and cosplays. It did a fine job of being a typical, local anime con. They hosted guests like Hoku Props, Downen Creative Studios, Faye Mata and Mike McFarland. Their vendor hall was fantastic as always (and better lit than the previous hall) and the gaming programming was much more easily accessed than previous years. 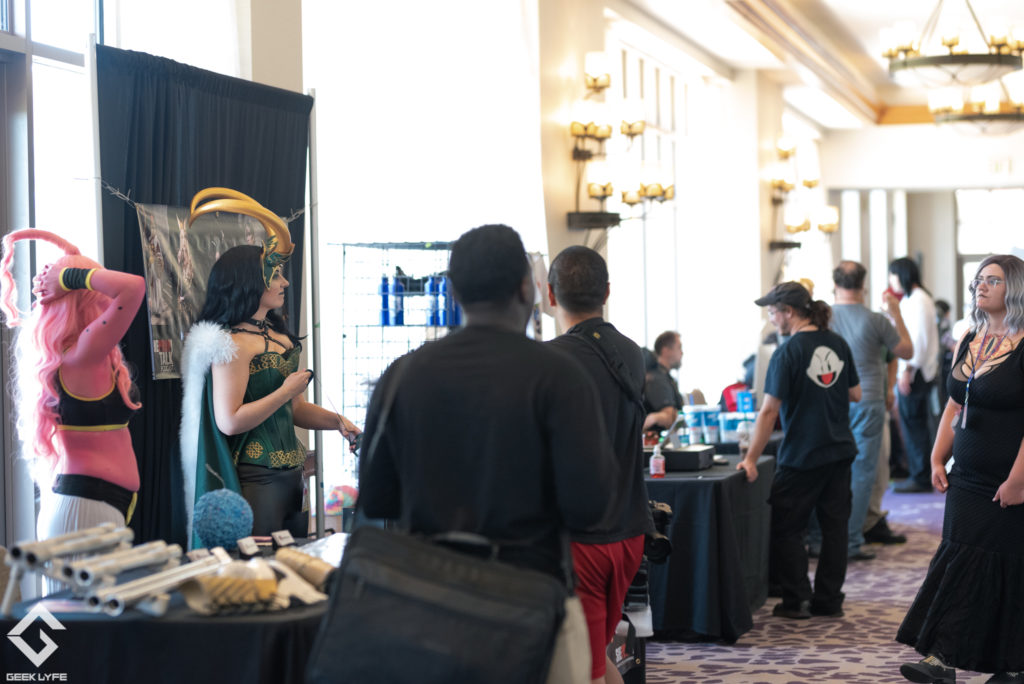 I’m greatly looking forward to next year’s Con Nichiwa at the DoubleTree Reid Park. I’m sure that Monkey Paw will redeem themselves after this blunder, and that the convention will continue on for many years to come bringing anime and gaming entertainment to Tucson’s geek community!