BREAKING: Weapon Props Banned From Phoenix Comicon Due To Armed Man On Site

UPDATE: Phoenix Comicon has released a statement about the situation.

This is breaking news, we will attempt to keep information as up to date and as accurate as possible. Earlier today a man armed with multiple firearms including a shotgun was arrested on site by police after they received reports of his intent to harm officers. Since this incident Phoenix Police department has officially banned all cosplay props from Phoenix Comicon for Friday, Saturday and Sunday.

At 2:50 the announcement begins. They recall the incident and at 4:14 they announce the ban on cosplay weapon props advising all attendees to not bring them to the event. They also mention increased choke points to ensure everyone is checked.

We here at The Geek Lyfe urge all those attending Phoenix Comicon to please comply to the Phoenix Police department’s ban as it will make their job of keeping everyone safe easier. I know this is a shitty incident but it is always better to be safe than risk harm to anyone. It is unclear on whether the man made it past the initial security check point or not. Man has not been identified at this time and it is not known if he had a pass to the event only that he was on site, deep enough to be around attendees and resisted arrest but ultimately, thanks to the quick action of the Phoenix PD, no one was harmed. 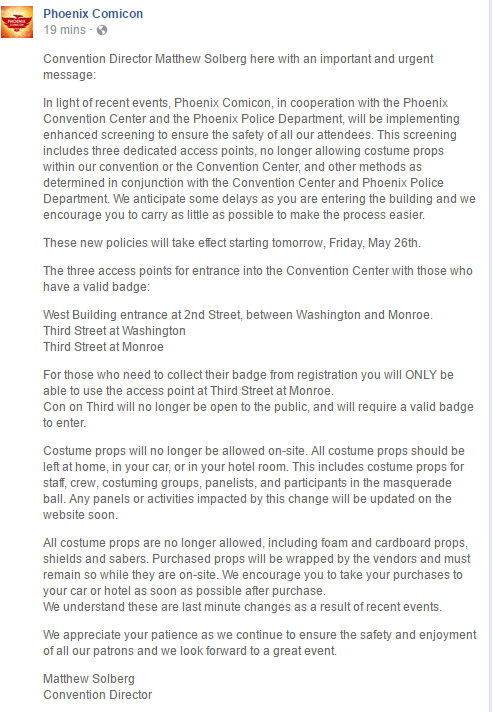 They also stated that they believe this man acted alone and should not reflect the community as a whole. Phoenix Comicon should be a fantastic event and we urge everyone to have a great time despite these unfortunate series of events.
Please remember to stay safe this weekend and if you see something odd, report it just to be safe!

Pirates Life For Me: Pirates Of The Caribbean Dead Men Tell No Tales

1 thought on “BREAKING: Weapon Props Banned From Phoenix Comicon Due To Armed Man On Site”