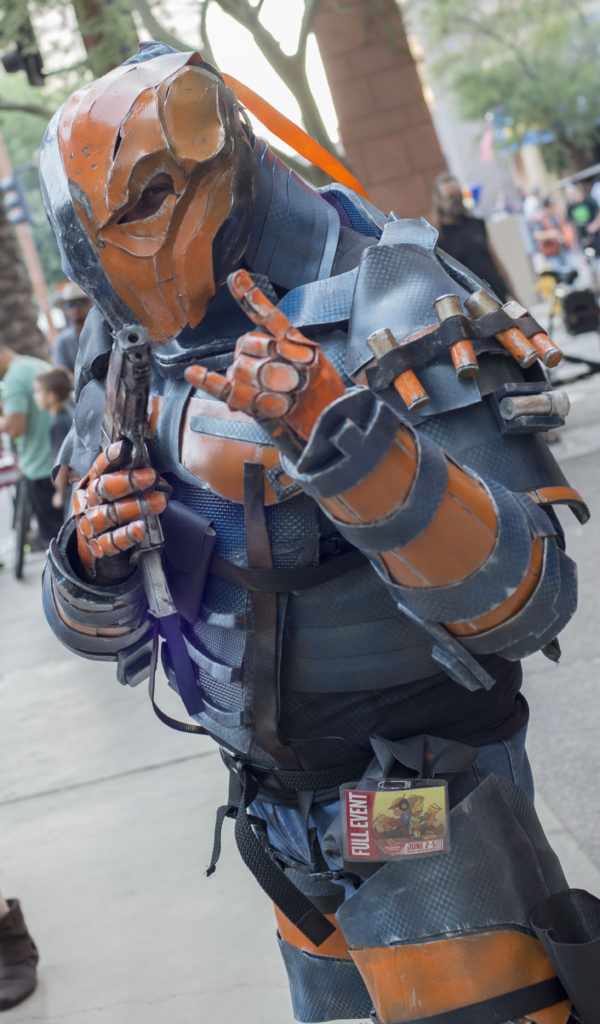 Cosplaying a villain is dope! Please don’t be one in real life!

To begin I want to say that I love and adore Phoenix Comicon. Their event blew my mind when I went my first time in 2012 and was one of the major factors in me starting The Geek Lyfe. I know just how hard everyone works because I have friends who work as staff for Phoenix Comicon and don’t want to miscommunicate my feelings about the event. Despite my affection, I must point out a potential flaw of the event in hopes it will receive enough attention by either the staff or the community to help alleviate the stress many face.

For those who have not been following the events leading up to Phoenix Comicon, they announced a series of changes to their staffing which resulted in an all paid staff but at the cost of having a reduced crew. The affects of this change have already been felt by a number of folks in the community from media outlets not receiving information regarding their approval or denial of their press pass status nor how many they would receive until Wednesday of last week, which is less than a month and a half before the event or cosplayers who are all putting their heart and soul into their cosplay to show off for the masquerade but are given vague information on the new rules that are in place for this year and yet they are still expected to have their cosplays submitted as soon as possible. When emails are sent asking for additional information for these topics or others, many do not receive a response.

Granted, with a reduced staff this is to be expected that certain aspects of the convention are delayed due to staff members having to wear multiple hats. I am also certain everyone is working long hours and to the best of their ability. However, many feel uncomfortable with the reduced staff, including cosplayers and vendors. Security was an issue last year as many attendees reported that they felt that the amount of guards they had last year were not enough to catch mishaps or assist with prop checks. With over 100,000 attendees in one weekend, it is not hard to imagine why it was difficult to monitor and screen so many people and I still greatly appreciate the efforts made by the Phoenix Comicon staff and Phoenix PD who were on site helping. UPDATE: Members of the community have informed me that security is made up of Phoenix Convention Center staff. Their involvement and the amount of guards/supervisors/PD allowed is negotiated by Phoenix Comicon and Phoenix Convention Center via a contract. 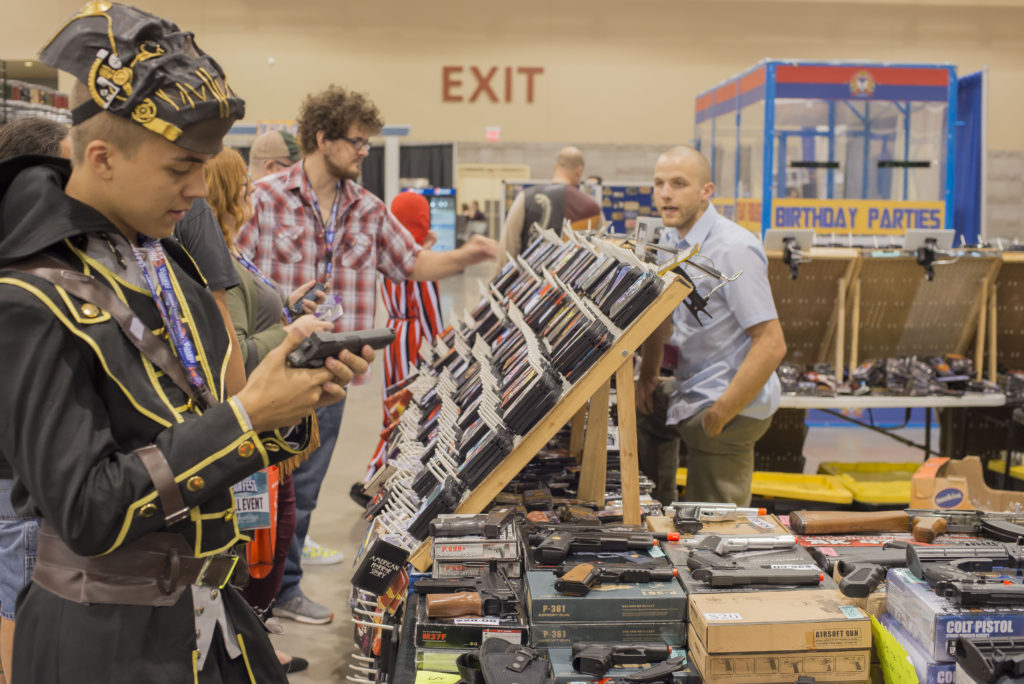 Taken at Fan Fest but still shows how many potential buyers vendors have to keep track of at one time.

In past years cosplayers have reported being sexually harassed and vendors have reported having their wares stolen from their booths without a security member in sight to assist. Some vendors have openly said that they will not attend Phoenix Comicon because it costs them too much money to pay the initial booth cost and then to have their goods stolen while trying their best to market their products to attendees. While I have absolutely no hard numbers to back me up, my educated guess is that at best the security would be the same as last year, which was not enough, or even less while still having around the same amount of attendees.

If this seems like making mountains out of mole hills, I completely understand. I too didn’t even consider the effects of low security and a high volume of people on vendors and cosplayers. I assumed people got sexually harassed and items were stolen at every event, which is terrible, but still does happen because there are shitty people in the world. What I did not consider was the fact that last year the vendor hall became so packed that security had to close it off because the area reached its limit.

Now imagine you are a vendor at a table by yourself talking with folks to the left of you and watch as someone swipes something from the table out of the corner of your eye and slips into the vast sea of convention goers in a tremendous vendor hall. You look around and can not spot any security and can not leave your booth to chase them down in fear of having more items taken. It might even be hard to remember their face because so many people are coming to your booth. Take a moment to consider you are in cosplay and have to go anywhere by yourself for an extended period of time and find some convention goers following you for an uncomfortable distance and despite your attempts to voice your discomfort, they continue to pursue until you encounter more people and get into your car or uber. These are unfortunate situations that happen and while they may not always be able to be prevented, having any sort of help to reduce the amount it happens is appreciated.

Obviously the Phoenix Comicon staff are working their hardest and can only do so much this year after so many changes have taken place. Even with all the emails and phone calls we can make, it would only have a slight impact. Instead, I think coming together as a community might have more of an impact. If you see shady stuff happening, be vocal about it and call folks out. These vendors pour their heart and soul into their craft and every sale matters so much to them. If someone is stealing, then shout it out to them and report it when you do find security. Don’t resort to physical violence, even if you believe they deserve it, it’ll only cause more problems. Same goes for cosplayers, if you notice someone being actively harassed, call them out on it. Creeps tend to only have courage when they are isolated with their victim but if enough attention is drawn, they turn tail. Again, trust in the security to assist because I have no doubt in anyone one guard’s ability to do their job, my concern stems from not having enough security to accommodate overwhelming amount of convention goers. 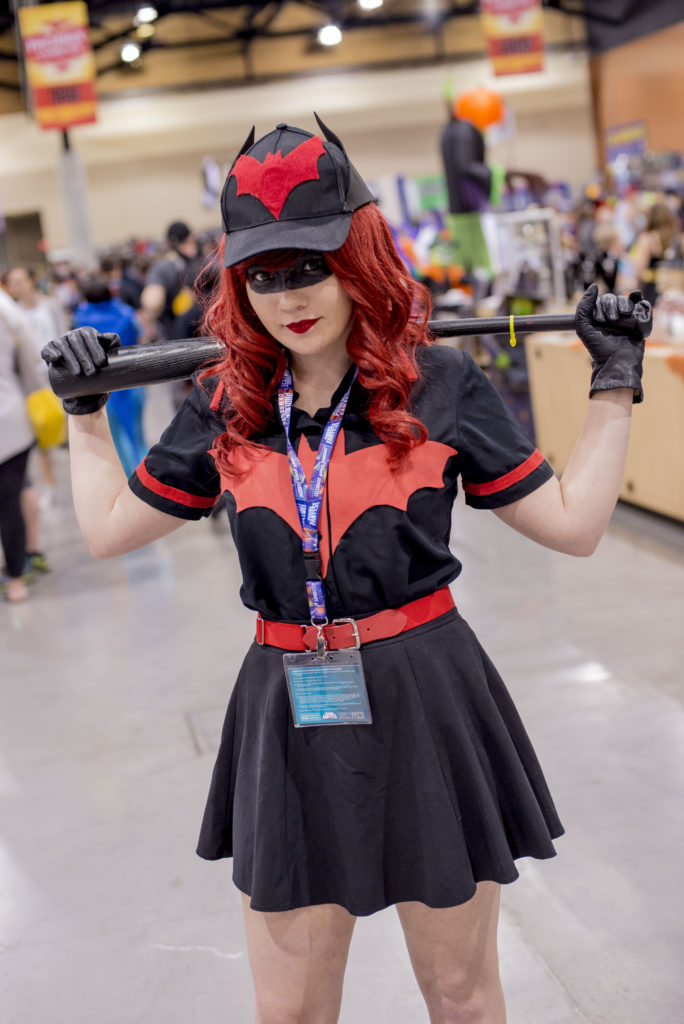 If you have thoughts of theft or harassment for Phoenix Comicon, I urge you with every single fiber in my being to reconsider. You’ll find nothing but disappointment and possible legal action for such little gain. Just go and have fun and focus on being with your friends, the trouble you have in mind isn’t worth it. If you really want something from a vendor, talk with them about it and, who knows? They might be willing to make a deal or even hold an item until you can afford it! But stealing is an absolute disrespect to the artist, you know your parents raised you better than that. When it comes to cosplayers, treat them as you would your cousin and respect them.

Ultimately, we here in the Arizona geek community are one big family. We all go to the same events, enjoy the same entertainment, come from similar backgrounds and so much more. We need to help lift one another up whenever we are at our most vulnerable, especially during such times that we should focus on rejoicing on such a fantastic event such as Phoenix Comicon! Once again, it is never my intention to speak ill of Phoenix Comicon or its staff so please do not misunderstand my message. Security concerns will always be an issue no matter the event or how much preparation there is and they will only grow every year because Phoenix Comicon gets better and better with age. I can only hope this article inspires even just a small bit of understanding and motivation to look out for one another to ensure we all have a fantastic time!

Despite this PSA, you should know that Phoenix Comicon is a wonderful event and I highly recommend checking it out if you can! They have a huge line up of guests and there are wicked awesome events going on that you will not want to miss! For more information check out https://phoenixcomicon.com/

Thanks for hearing me out! I would love to hear your thoughts on this, feel free to comment below!

Game On Expo Skit: Darth Mexican vs The World 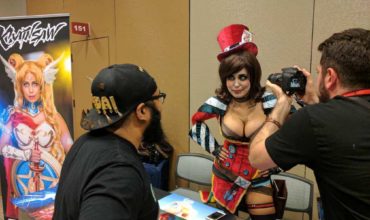 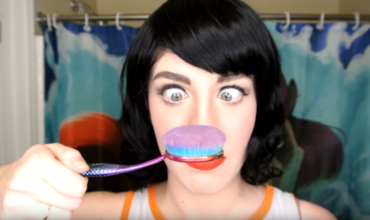 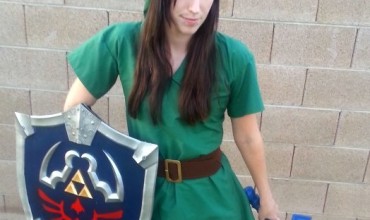 Causeplay: Cosplay for a Cause 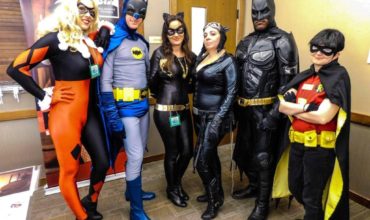